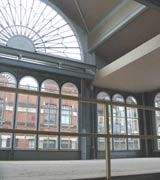 Iqbal Wahhab, founder of the upmarket Westminster-based Indian restaurant Cinnamon Club, is set to expand his portfolio of eateries with the roll-out of a series of branded restaurants across London, creating opportunities for design groups.

The ‘dual identity’ project will initially comprise two restaurants located in London. Edge Design will draw up the interior concepts and its managing director David Gabriel, who designed the interiors of the Cinnamon Club, will oversee the project (DW 16 March 2001).

Wahhab has also drafted in advertising agency M&C Saatchi to develop the identity for the restaurants.

‘They have started working on a name, it will be more of a brand,’ says Wahhab.

A two-storey 555m2 restaurant, located on Cockspur Street off Trafalgar Square, is set to open by March next year. One floor will be dedicated to selling New York food, while the other will concentrate on local foodstuffs sourced from New Delhi in India.

A second restaurant, based on a similar eating concept and located in Canary Wharf, will launch in autumn next year.

‘Both schemes will be contemporary, with a couple of twists,’ says Gabriel.

Wahhab has also appointed HGV to come up with a new identity to brand his long-anticipated English restaurant, Roast, located in Borough Market (pictured).

HGV replaces Design United, which created an identity featuring a grass graphic earlier this year that will now be scrapped. ‘We are moving in a different direction and the work is in progress. I want to rejuvenate interest in British cuisine. It has taken some hard knocks over recent years,’ adds Wahhab.

HGV creative director Pierre Vermeir says the identity will be ‘a big departure’ from the old identity and will be ‘more about natural ingredients’, featuring images of, for example, the grain pattern in a block of wood. ‘The name Roast is very evocative and emotional; the identity will not be static. We are moving in the right direction,’ he adds.

Roast was scheduled to launch this spring, but will now open in October, following difficulties finalising the lease. Edge Design is still working on the interiors for Roast (DW 13 January).

2006 ‘Dual identity’ restaurant to be located in Trafalgar Square and Canary Wharf. Interiors by Edge Design. Identity to be decided. Another Cinnamon Club planned for New York

2005 Roast, with interiors by Edge Design, identity by HGV. Planned launch this year

The Solution Group create sleeve design for The Back Room