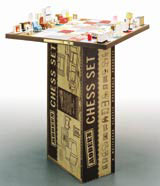 Turner Prize-winning artist Rachel Whiteread has teamed up with Newcastle-based design consultancy NE6 for the design of a work of art inspired by the design of the humble chess set.

The creative collaboration was commissioned by the London arts group RS&A, which will exhibit the work in New York towards the end of the year. Whiteread created the set of 1950s-inspired chess pieces, while NE6 was appointed to design the graphics for the box and the instructions.

RS&A has commissioned four other chess sets for the show, from Barbara Kruger, Tom Friedman, Matthew Ronay and Brazilian artist Tunga. These will be on display at the Luhring Augustine Gallery in New York from October.

It is the RS&A’s second such project. The first, called The Art of Chess, was shown at London’s Somerset House in the summer of 2003 and featured experimental chess set designs by Jake and Dinos Chapman, Damien Hirst, Paul McCarthy, Maurizio Cattelan and Yayoi Kusama.

‘With all these projects, we want to continue in the great tradition of the chess sets from the 1920s and 1940s,’ explains RS&A founder Julia Royse, referring to the chess designs created by the Bauhaus and Avant Garde movements. ‘All the works we’ll be showing in New York are very sculptural, but they also have to be playable. If they aren’t, they start to become gimmicky,’ she says.

RS&A describes its aims as forwarding the production of art across diverse cultural spheres, to create unique and thought-provoking artistic projects. ‘The chess set is a beautifully integrated piece of work where we were able to realise Rachel’s vision. For us, it is the perfect marriage of art and design,’ says NE6 director David Coates of the group’s involvement.

NE6 was approached privately and awarded the work following an exploratory presentation of ideas, he adds.

Jack of all mobile trades