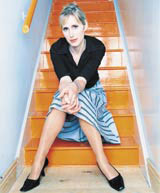 ‘I will not ever…’ was originally a one-off picture book aimed at younger children. ‘But I thought I could do more with Charlie and Lola. And as they’re so clean, I thought they’d work well as products, just as Dick Bruna’s Miffy does,’ Child explains. Having had her fingers burned before, Child was careful to choose the right company. ‘I was much more hard-nosed the second time around. Tiger Aspect had never produced children’s TV before, so it didn’t have a patronising view of it, which I liked. And it was happy with my stipulations: using only children’s voices for the show and controlling the merchandise ourselves.’

Child’s writing is just as strong as her illustration. ‘The writing has to have its own edge, flavour and personality. You have to write books that adults want to pick up and read to their children. But poor illustrations can drown good writing, just as great ones can lift a poor text. The best drawings add another strand of personality to the text, just like Quentin Blake,’ she says.

Charlie and Lola the animation will keep her busy for the next few months, but then it’s back to the drawing board, literally. Harry Potter, watch out.