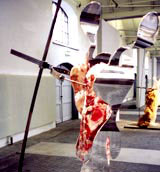 AMX has collaborated with fashion designer-turned-artist Helen Storey on an exhibition at the latter’s show, Mental, which opens at central London’s Institute of Contemporary Arts on 7 July.

The AMX-designed installation, Whisper, is an interactive game featuring a circle of five iMac computers on which visitors answer questions including “What colour is love?” and “What makes you angry?” The answers are fed to a fictitious on-screen character, which modifies its form depending on the responses. The final image is projected through a large honey bowl.

“[Whisper] explores the notion of creativity,” says AMX president Malcolm Garrett. “We didn’t want to recreate an Internet cafÃ©. We chose iMacs because they are design-led and a move away from traditional ‘grey box’ computers,” says Garrett.

“The interfaces are warm and televisual to encourage people to interact, rather than ‘Microsoft-like’. We want to encourage visitors to take part and not remind them of their offices,” he adds.

Mental is “a scientific exploration of the links between emotions, feelings and the creative process”, according to an ICA spokeswoman. It aims to “engage visitors in an informal and playful way and encourage visitors to interact emotionally and physically with the four exhibits”.

These include Death Dresses, First, Last Everything and BZ Reaction.

AMX started to develop the Whisper project with Storey in 1999, on the strength of an earlier collaboration in Beijing, China with an on-line teaching project.

The information gathered from Whisper will be analysed by scientist Dr John McLachlan, director of the Peninsular Medical School, University of St Andrews, Scotland, who has developed Mental in partnership with Storey.

Sub-titled “A walk through one woman’s mind”, the show is designed by London’s Chelsea College of Art.