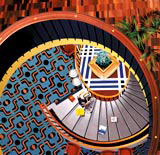 In the early 1990s, illustration was in decline. Graphic designers and art directors had turned their backs on commissioned work in favour of stock images and copyright-free CDs, and the technology that enabled them to manipulate and edit at will. As a result, the craft became increasingly anachronistic. It was seen as parochial, expensive, impossible to edit and aesthetically at odds with the “typo/ photo” zeitgeist.

According to Angus Hyland, Pentagram partner and author of book Pen and Mouse, “Today we are witnessing the dawn of a new era. Illustration is in the ascendant for a number of reasons: the cyclical nature of fashion; the appreciation of emotively-led, figurative, interpretative imagery versus conceptual art and omnipresent photography; and, of course, the illustrators’ own increasing use of technology – the revival serving as a bridge over which illustration has crossed from the analogue to the digital world.”

Pen and Mouse investigates and exhibits the work of image-makers, whose craft occupies the space between graphic design and fine art. It addresses a range of imagery from analogue to digital, and seeks to encourage image-makers to define their work in their own terms. Interestingly and, in testimony to the rationale for the resurgence of the craft, the majority of the work submitted is figurative and more than 50 per cent of it uses technology as a basic tool.

“The book sets out to establish some rising stars,” says Hyland. “Many of them, while still largely ‘unknowns’, have nevertheless been appreciated by popular audiences for some time, with work appearing in weekend supplements and advertising, on book and CD covers.” Jeff Fisher’s cover for Vintage’s Captain Corelli’s Mandolin has become one of the most familiar illustrations in recent years; Paul Davis’ editorial and fashion imagery prompted poster commission for and an invitation to exhibit at the current Jam exhibition at the Barbican; Jasper Goodall and Graham Rounthwaite have created memorable imagery for Levi’s ad campaigns; and Marion Deuchars, who has evolved her work from traditional paint to technology, created the jackets for a series of George Orwell books for Penguin 20th Century Classics.

“The structure of the book is twofold,” says Hyland. “First, it is an introduction that investigates the reasons for the resurgence of illustration, sets the illustrators in context and explains why their work challenges traditional definitions previously applied to the craft. Second, it showcases the work, alongside the illustrators’ responses to a questionnaire. This is the central focus of the book, which is designed to provide insight regarding their views on role and purpose.”According to Hyland, responses reveal surprising comfort levels with existing nomenclature for the sector, despite the fact that academics and outsiders are constantly seeking new definitions. Furthermore, the increasingly ubiquitous use of technology now places these tools alongside traditional materials – and not as the driver of the work. One of the contributors, Spencer Wilson, perhaps summarises best on behalf of the majority of respondents, “Craft is a skill that is required, whereas technology is a tool to be used”.

Pen and Mouse: Commercial Art and Digital Illustration by Angus Hyland is published by Laurence King in mid-July and designed by Charlie Smith. Priced £19.95