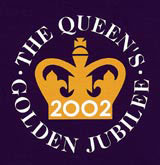 Prime minister Tony Blair revealed the logo for the Queen’s Golden Jubilee celebrations in 2002 in the House of Commons last week.

The group, which worked on the project for free, won the right to design the logo after approaching the Home Office.

‘The brief was very much that it had to be universally used,’ Jenkins says. ‘The form is deliberately simple and very easy to produce across a range of mediums.’

The logo, based on a crown, will be used to brand souvenirs and events.

Next year’s Golden Jubilee will be marked by an additional public holiday on 3 June that will allow a four-day celebration of the Queen’s 50-year reign.