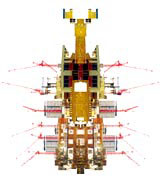 The yearly visit to the Royal College of Art show leaves you with a rather confused feeling. Have you just seen the future, or just another load of navel-gazing? It’s only with the passage of time that these shows can be put in perspective and you can tell if you were catching a glimpse of the designers of the future.

This year I’ve avoided the squash at the private view and had a sneak preview of eight of the 51 graduating students’ work, and had half an hour with Gert Dumbar, recently appointed visiting professor of graphics – oops no, sorry, I mean Communication.

Dumbar’s appointment came about as a result of a committee set up a couple of years ago (of which I was a member). Primarily established to rubber stamp a proposal by the college to merge the graphics and illustration courses together into a Communication course, the meetings highlighted another issue.

While other departments could boast of the likes of Nigel Coates and Ron Arad as figureheads and illustration could draw on both Dan Fern and Andrzej Klimowski, graphics could only really draw on a bunch of one-day-a-week ex-graduates who came in to drink coffee on Thursdays. A nice bunch, but global design figureheads? Not really.

There then ensued some serious fishing on the part of Sir Christopher Frayling for “name” professors, which eventually caught Dumbar, and, for interactive design, Malcolm Garrett.

While Garrett’s appointment seems entirely in keeping with the principle of asking an established professional willing to give some time back to education, Dumbar’s was a surprise. Not in terms of global reputation, of course, but because Dumbar had already held the job 15 years previously. During his last stint in Kensington he was instrumental in dragging British graphic design out of its self-imposed, centred-type-below-witty-pun torpor. This reign coincided with a fresh crop of disciples (including Why Not Associates and North) – a generation happy to chip away at received wisdom.

Dumbar clearly enjoyed the running battle he had with the then RCA rector Jocelyn Stevens (which eventually led to his dismissal), animatedly describing a sort of guerrilla culture that he was able to instil in his willing disciples of what seemed, back then, like graphic anarchy.

This time around things are obviously a lot different – course leader Dan Fern’s determination to merge related disciplines and embrace digital media, theatre, sound design and conceptual art has created a much looser structure. Dumbar says that this is what attracted him to his old job, citing the RCA as “the only place in the world where illustration and graphics are gathered together in this way”.

This year’s graduates have only been “Dumbarred” for the second of their two-year stay, so visitors coming to the show to spot the hand of the Dutchman will be saddened by the conspicuous lack of staged photography and deconstructed type. Most of this year’s graduates applied when the courses were still separate, and had no idea that courses would merge and the visiting professorships would be revamped.

So what is the work like? Well, if you’re coming as an admirer of the recent trend towards conceptual thinking and layers of meaning, then you won’t be disappointed. Fern wanted to blur the boundaries between media, so it comes as no surprise to see Emma Sullivan apply for the course and then spend two years making narrative video, or a Brighton graphics graduate, Tara Hanrahan, devote a significant period of time to plotting the colour of the sky at different times of the day. Tom Vollouschek and Agathe Jacquillat have merrily observed a set of cranes on view out of their window and turned them into the stars of their own A3 brochure, animations, website and CD-ROM.

Most of the students freely admit to the course allowing them freedom to indulge themselves for a couple of years. Most, not surprisingly, either want to work for themselves or work for ex-graduates, ensuring that those carefully constructed baffles between themselves and “real-world” design remain intact.

Whether two years spent endlessly worshipping at the altar of self-expression is really furthering design remains to be seen – the course has gradually become more about visual research and less about bashing out posters or websites. When taking part in re-validation two years ago, Fern urged me to come to a lecture by Tomato co-founder Dirk van Dooren, because he felt that was the best exposition of where he wanted his students minds to be.

I guess that’s the point of postgraduate design courses – anyone desperate to get out and get on with it would never apply to this course. Minale Tattersfield no longer boasts that all of its designers have studied at the RCA – this is a generation encouraged to work only for themselves and take orders from no-one.

But some students have remained impervious to the forces around them – Billy Kissogolou joined the course interested in books, spent two years working on them (including five months spent hand-setting a booklet on climbing stairs in 9pt Grotesque) and now he’s going to design more books. Anja Gerscher (who described her meetings with Dumbar as “the collision of German logic with Dutch aesthetic madness”) is leaving with a body of fascinating work based on the exploration of time, including some fabulous escalator photographs.

Sarah Black joined the course as an illustrator and will leave with a photographer’s portfolio and editorial commissions pending. Judith Pourrier will return to Montreal in Canada having been given the space to explore her book designs, based on the writings of Camus.

It’s probably fitting to end with Nicola Murray’s degree show plans. She’s going to fill her whole 4m by 1.5m space with white em-spaces cast from a typesetter’s case. Thousands of redundant spaces, cast in white, to fill a white space. As she puts it so well, “It’s great to get lost in the luxury of self-indulgence.” Isn’t it?