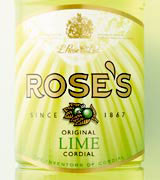 Turner Duckworth has repackaged Rose’s Lime Cordial and created livery for two line extensions, which will go on shelf next week.

The project is the second the consultancy has picked up from brand owner Coca-Cola Enterprises since February, when it won the relaunch of its flagship still drink Oasis (DW 16 February). Turner Duckworth has worked on Schweppes brands, which were taken over by Coca-Cola last year, for seven years.

The brief was to position Rose’s as the premium cordial in a market that has become increasingly commoditised by cheap squash and high juice content brands, says managing director Bruce Duckworth.

The new livery is designed to communicate the intensity and clarity of flavour of Original Lime, Zesty Orange and Cloudy Lemon, Duckworth adds.

The solution involves a bespoke bottle with the visual device of light shining through the shape of each fruit and around the redrawn Rose’s logo.

“We wanted to communicate the crisp, pure taste of the drink. We did so by showing the underwater view of sunlight shining through water, the sunlit shape echoing the shape of the fruit,” Duckworth says.