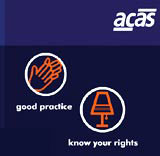 Employment relations and conciliation service Acas is relaunching its website today as part of an ongoing campaign to update the organisation’s image.

The website has been created by Taylor McKenzie, which has been working with Acas for more than a year. The consultancy also developed the organisation’s corporate identity, which was unveiled in March.

The group won the identity contract in a four-way credentials pitch, while the website work followed this without a pitch.

“Acas has always been thought of as being to do with trade unions,” says Taylor McKenzie director Kate Bowen. “The idea of it being more of a 1970s organisation still persists, but it is actually a very different organisation now. There are not so many large disputes so it tends to deal with lots of smaller organisations.”

Acas handles more than 100 000 complaints to employment tribunals each year and receives some 750 000 calls to its helplines.

It wanted an on-line solution that would reflect this and be able to deal with a high number of enquiries.