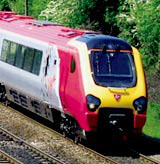 Pleased as punch with his consultancy’s design of Virgin Trains’ new Voyager tilting trains, he took a Design Week hack off to Reading station to board the 11.41am to Wolverhampton, expecting that this would be one of the ‘secret’ trains slipped into the schedule to put the new model through its paces before it goes full service.

Making their way through behatted hoards en route to the Ascot racecourse, the hapless pair found themselves waiting at an empty platform.

The train had been cancelled without warning. Virgin was testing the doors, they were told. A new spin on ‘leaves on the line’ maybe.