What does Swiss designer Julien van der Wal’s 1967 work for a sunglass label have in common with Renaissance print branding? Quite a lot, according to the latest issue of LogoArchive. 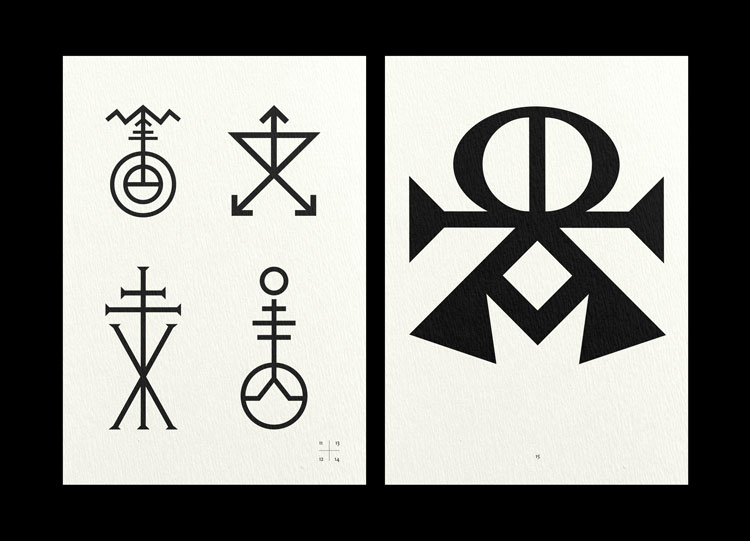 “As printing spread across Europe in the decades that followed the invention of the printing press, firms realised the urgent need for a device to define their product and differentiate themselves from their competitors,” Leader explains. The firms – as the printing presses called themselves – used these marks for a variety of reasons.

Some were practical. Once a press had assembled its inks, moveable type and was creating desirable objects, it made sense to be clear about who had created the book to protect against piracy. It also developed into a wider brand-building exercise, according to Leader.

He points to the mark of London printer and publisher Wynkyn de Worde, whose designs would often feature sun icons. “That became an icon in its own right, which became symbolic of Wynkyn de Worde on Fleet Street,” Leader says. “It became part of the visual identity alongside the logo.” Leader also suggests that German printer Albrecht Durer may have established “the first celebrity brand” by using his monogram as a mark.

Leader sees parallels with the early days of the internet in the 1990s when “all of a sudden, everyone felt the need for a website.” The printers’ marks were a useful way for firms to differentiate themselves and not only to readers. It was also helpful for contacts, suppliers and competitors within the print industry, Leader explains. Unlike more recent design trends however, the often-mysterious marks do not make much reference to technological advancement. As Leader says: “It is this mark making which beguiles and fascinates the viewer. It is a signifying mark without a literal meaning.”

One example of this highlighted in Logo Redux is the ‘reverse four’ mark. This design reversed the number ‘4’ and often placed it on top of an orb shape. The framework could be altered for different printers with the addition of initials, for instance. The inverted sign may have roots in the church and printers would have seen it on merchants’ good where it was used to distinguish and authenticate products. “The orbs look so strange and curious and different,” Leader adds.

Leader is particularly puzzled by the mark for German printer Arnold ther Hoernen, which resembles an angled heraldic crest with one side missing. It also features two crosses and a star icon. “It feels like experimental practice and intuitive,” Leader adds. The symbols and unfinished crest framework are part of the mark’s mystery. “The fact that it doesn’t complete its journey intrigues me.”

There’s also the triangular mark of French printer Thielman Kerver, produced at the end of the 15th century, whose design Leader calls “interrupted”. There’s no obvious inspiration – it could be religious, but it’s not definitive. “I do find it seductive when you see that mark making and line making and it’s not immediately recognisable.” Other highlights include marks for a Dutch and Italian printer, which may have been designed to allow people to add their initials.

Leader admits that there is a difficulty with making assumptions when looking back over 500 years. It’s possible that meanings may have been clear to the printers and their contemporaries than they are to modern onlookers. It does seem clear that they were part of a trend towards ornamentation in editorial design, impacted by the addition of woodcut illustrations to the pages.

It was this typographic and editorial design of Renaissance books that initially attracted Leader’s attention – the use of the golden ratio and application of a grid system, for example. Books were also viewed as “interactive”, Leader says, so a reader might be encouraged to annotate the outer margins with their own reflections. Often, miniature drop cap letters were used so that readers could fill in their own decorative designs. “Wealthy owners had the option to commission craftsmen to illuminate and colour illustrations or maps,” he adds.

This was just one trend in design at the time, according to Leader. Pictorial marks also emerged, such as Aldus Manutius’ mark which depicts a dolphin intertwined with an anchor. Used to convey a sense of curiosity, that mark differs from most featured in Logo Redux. “I’m intrigued by the early marks where there’s no literal interpretation of what they’re doing, there’s no physical drawings of a printing press or an open book or anything you’d expect,” Leader says. “I like the fact that they must have been looking around – a designer as an observer.”

“A forgotten era of logo design”

It’s this sense of beguiling simplicity that links them to modernist marks, Leader believes. He points to examples such as Helmut Salden’s 1970 logo for De Baak Management Institute, Walter Brekker’s 1951 design for Goldschmiede Bauch-Engein and Karl Gerstner’s 1961 work for Helvetia Feuer Insurance. “For me, they embody similar qualities of intuitive mark-making and the relationship of shape, which creates an economic visual language,” Leader says. “It’s a recognisable connection for present-day designers to make, while discovering an overlooked or even a forgotten era of logo design.”

Leader links that to the ornamentation around the Renaissance marks, which he views as a “distraction”. “When I look at these logos, they don’t need the decoration of woodcut illustration around them – the mark is enough,” he explains. It’s another comparison point to the modernist marks from the 20th century, which may themselves have been adorned with imagery – photography in annual reports, for example. Both sets of marks are “beautiful on their own”, Leader says.

Leader sees the zine as the start of wider (and much-needed) investigation. He also believes that different designers will find different links within the selection. “There’s a surprise of looking at these logos for the very first time and doing your own research,” he adds. “You’re making your own comparison.”

He has taken his own lessons from the project, however. “The marks’ simplicity is their charm – they’re not overworked,” Leader says. It reminds him of conversations he’s had with designers about ‘signifying marks’: a logo that requires unpicking can be as effective as one that’s more immediately obvious. “It enables you to think of that mark as synonymous with that organisation without it being completely a literal interpretation,” Leader says. “Although it looks obscure, it needs to be deciphered – it’s not handing everything to you on a plate.”

LogoArchive Extra Issue: Logo Redux is available to buy now from the LogoArchive website. It costs £10.