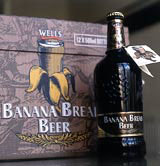 Never mind the fact that the market for fruit flavoured beers is already well satisfied by Belgian Kriek beers, and certainly doesn’t need anything as retch-inducing as Banana Bread Beer (DW 14 March), the prospect of Charles Wells Brewery’s new line being targeted towards women had me rubbing my chin and gazing skyward.

Does anyone else remember Bleu de Brasserie? Just how many months did that twitch and gasp before vanishing into the embarrassed throat-clearing section of the Allied Breweries’ brand museum?