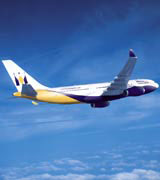 Low-cost airline Monarch’s decision to rebrand its premium Crown Service to Monarch Scheduled (DW 21 March) is an indication that consumers do not find royal name associations relevant in today’s marketplace.

Monarch commercial director Jonathan Crick says there was no mileage in continuing to use the Crown Service brand.

So what is the future for brands with similarly regal words in their titles? Do prefixes like royal and princess have any validity in terms of a premium service?

Tim Greenhill, managing director of Basten Greenhill Andrews, says that these words are part of a language the consumer understands as representing a hierarchy and are positive branding tools. But there are problems, he says.

‘It’s rather like platinum or gold charge cards. You can’t make it your own and it’s not differentiating, so you have to rely on your core brand as being the differentiator.

Also, these words are tired and overused. Another crown service is not in itself newsworthy. You have to find some valid alternative,’ says Greenhill.

The Prince of Wales’ Duchy Originals brand was originally created by Lewis Moberly in 1992. It’s on-going success is down to the fact that the royal patronage is played down, says Lewis Moberly creative director Mary Lewis.

‘We created a discreet identity for Duchy to reflect the modesty of the brand itself and its simple, honest products,’ Lewis says. ‘We set out to avoid both flowery regal imagery and dusty heritage, as it is easy to resort to clichÃ©s [with royal brands].’

The Partners creative director David Stuart believes that, although this type of branding is an ‘extremely clichÃ©d form of gradation’, it is a form of communication that can work for some companies.

‘It is too sweeping a view to say that everything related to the monarchy is outdated. You find that some companies believe it has a value and is of great commercial benefit,’ he says.

Companies with royal associations in their names include Royal Dalton, the Royal Automobile Club, Princess Lines and Crown Paints. Not all will see a benefit from such associations.

The Royal National Theatre, to give its proper title, does not carry the Royal on its brand identity though its full title is sometimes used alongside the logo on posters.

Head of public affairs Vivien Wallace does not think that the theatre has benefited from having the Royal association.

‘It’s probably not made any difference to audience [numbers] or the profile of the theatre, though we wouldn’t drop it because it was given to us [in 1988 to celebrate 25 years in existence] and it is a marque of distinction.’

However, The National’s former artistic director Sir Richard Eyre was not happy with the prefix during his nine-year stint from 1988, according to Wallace. ‘He didn’t see it as being particularly helpful. The National sees itself as being accessible to everyone while [venues] like the Royal Opera House are seen as being elitist,’ she says.

The elitist nature of this type of branding is not a bad thing, says Landor Associates creative director Derek Johnston. It just depends on who it’s aimed at.

‘If you are dealing with premium brands that are targeted at people who are attracted and attached to that type of branding then it does have relevance. If you want a brand to have vestiges of an old tradition then references to the monarchy can be a good thing. But if you are trying to transform an airline into the 21st century it probably isn’t relevant,’ Johnston says.

‘I think everyone is a bit more egalitarian these days. People choose the brands they want, they don’t need an endorsement from the monarchy.’

When rebranding a company with a royal association in its name and faced with a choice to keep or drop the word, how would the experts respond?

‘I’d look at the case on its own merits,’ says Stuart. ‘These words can be perceived as not progressive or modern. But there are those companies that are benefiting from their historical references, their references to their craft and so on.’

Greenhill advises that companies look at their competitive set and establish how valid the word is in its marketplace.

‘The name is something you can associate with. Although you can’t just rely on a name, it is a valuable clue to the consumer. You try to avoid clichÃ©s as much as possible, and these words can be clichÃ©d, but simple communication is good communication.

The consumer shouldn’t work too hard to recognise what the brand is saying. But equally these words may not be differentiating so, ultimately, there are no rules in terms of branding,’ he says.

Some companies will continue to associate themselves with royalty, but the mileage they get from doing so is debatable.

Public perception of the monarchy is not as favourable as it used to be and companies may be taking a risk of alienating customers if they continue to play up such associations.