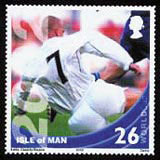 Sick of Royals on your stamps? Like to see some real people on them? People you can relate to? People with millions of pounds in their bank accounts and pop star wives, like David Beckham?

In an experiment to coincide with the forthcoming World Cup, the Isle of Man Post Office will issue six stamps featuring stars such as Beckham and Liverpool and England player Michael Owen, the first Royal Mail stamps to feature living people aside from royalty.

We think they should really push the boat out. Let’s see Ronnie and Reggie Kray on the next issue.