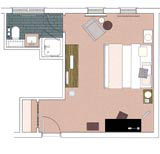 Billed as an urban retreat, this is the second addition for the mid-range boutique hotel group that was established in 1996. It has been designed by Project Orange, whose co-director, James Soane, was involved with the group’s first effort, Myhotel Bloomsbury, while still at Conran & Partners. The chain is quietly confident it has found a niche that offers an alternative to the staid, traditional hotel that is overtly reliant on the US market. All set to capitalise on the brand it has created, next in the pipeline are Myhotel Brighton and Myhotel Glasgow, both due to open next year, followed by Myhotel Paddington, planned for 2004. The group then hopes to move into Europe, pinpointing Barcelona as a possible next step.

While Myhotel Bloomsbury attempted to create the atmosphere of a town house, here in Chelsea it aims at the more Bohemian feel of a contemporary country home. Situated just behind upmarket shopping Mecca Brompton Cross, it is not chasing the city financiers, but is more likely to appeal to the younger media and fashion crowd seeking a contemporary alternative to the usual chintzy, plush west London hotel.

The building, which was built in the 1930s as a police station, was recently converted into a hotel, so much of the necessary air conditioning and services were already in place and all that was required was a new fit-out. As such, the scheme’s budget is a relatively modest £1.75m.

Consciously targeting the female market, the look is pretty and soft with artfully mismatched old and new furniture upholstered in English florals. The 45 bedrooms are decorated with a variety of soft furnishings, including full-length toile-patterned curtains, the only concession to technology being a stereo and wide-screen television.

‘Wellbeing’ is an important buzzword for the brand, and US feng shui guru William Spear is a consultant to the group, helping to decide where the ubiquitous fish tank and crystals should go. ‘We’re designing from the inside out – it’s a process of layering,’ says Myhotel owner Andy Thrasyvoulou. ‘The vibration quality and energy levels are very important.’ A mini fitness and therapy room offering aromatherapy and beauty spa treatments has been squeezed in. There will also be a library for guests to use to surf the Net, check their e-mails and relax. A lively bar will provide a contrasting buzz and will be available for use by non-residents.