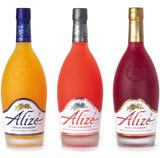 Pearlfisher has redesigned the identity and packaging for passion fruit-flavoured cognac range AlizÃ©, a favourite tipple of Brooklyn rappers.

New York-based client Kobrand Corporation is relaunching the drink across the US this month. It is set to roll out in Canada and the UK later this year.

The consultancy’s brief was to modernise AlizÃ©. The design work focuses on the brand’s ‘exotic joie de vivre’ and features an embossed motif of passion fruit flowers, revamped typography and a redesigned label.

The bottle structure has also been redesigned to have ‘greater feminine allure and feel sexier in the hand’, says Pearlfisher creative partner Jonathan Ford.

The brand is huge in New York clubs and bars, says Branson. Rappers have even penned lines in deference to ‘yak’ (cognac).

Pearlfisher won the AlizÃ© work following a credentials pitch around 18 months ago.