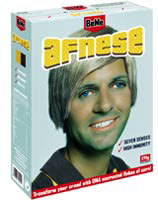 Most of us are comfortable with the idea of brands being used to promote everything from mineral water to football clubs. The supremacy of brand psychology has become a given in our way of life. But it would be a mistake to think of it as a natural phenomenon. Anyone who has caught the excellent BBC2 series The Century of the Self, currently showing on Sunday nights, will marvel at how the notion of consumerism as an expression of self was essentially invented in the 1920s. As one investment banker put it at the time (drawing on hand-me-down Freudianism), ‘people must be trained to desire’.

It’s worth bearing this in mind when leafing through Soon: Brands of Tomorrow, which envisages – among other things – a near future of branded oceans, children and funerals. Edited by Lewis Blackwell and Chris Ashworth, the book features varied contributions from the fields of graphic design, photography, film and advertising. Blackwell and Ashworth have pulled together an impressive cast-list of creatives – as befits a former editor of Creative Review, now international creative director at Getty Images and author of several books on typography, and the design director of the Gettyone design studio. Among the well-known names commissioned are Din Associates, Seymour Powell and Jam.

Images in the book are interspersed with gobbets and factoids of ‘future data’, compiled by Getty Images Creative Research and intended to provide some context for the imaginary brands. In the introduction, Blackwell appears to endorse the extension of brand thinking into these scenarios, which involve privatising the oxygen supply and packaging DNA, as both inevitable and an inherently good thing. But, as he readily admits, the contributors may have their own agendas. Certainly, much of the content would not look out of place in an issue of Adbusters magazine.

Australian consultancy The Glue Society imagines racially-altering cornflakes that can ‘transform your creed’ with their ‘genome jumping’ ingredients.

Magic Hat suggests cloning is the ideal opportunity to burn two candles at opposite ends – you want to play out late and have an early night? No problem. One of you can party, while the other sleeps.

Elsewhere, the ad agency Mother anticipates a style magazine for when 30-something Hoxton types reach pensionable age. Called Gray, it might be the book’s surest prediction. Intro’s join-the-dots (or, more accurately, draw-the-diagonal) guide to brand naming will raise a smirk among the experts.

How far can the concept of branding stretch before the elastic snaps? There is a yet more satiric edge to Stereo Yeti’s sponsorship literature for The War Channel, which is almost Chris Morris-like considering current events. Indeed, it’s hard not to notice the date ’11 August 2001′ mentioned in the introduction when we all know what happened exactly a month later. Simon Johnson’s acrylics of trademark symbols and his letterpress ‘God Bless America’ are uncannily prescient of the linking of patriotism and purchasing power following 11 September.

Soon was due to be published last year. This sounds corny, but it does seem like the product of a less anxious age. Might its assumptions be different now? Yes, ‘brands offer a way of belonging’. But so do more human things too. The book’s key phrase, ‘a brand is nothing wanting to be everything’, would be vacuous at the best of times.

Today, it looks a bit naive.

Soon: Brands of Tomorrow, edited by Lewis Blackwell and Chris Ashworth, is published on 2 April by Laurence King, priced £25