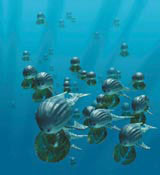 Bristol-based 422 South has produced graphics and computer-generated imagery for John Adams Television’s £4m documentary The Future is Wild. The 13-part series, which looks 200 million years ahead to predict future evolution on Earth, will be broadcast worldwide from early December. The 422 South team was led by creative director of animation Peter Bailey.