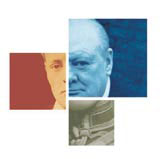 The Churchill Museum has unveiled a visual identity designed by branding and marketing consultancy Marsteller. The identity will be used to help build international awareness of the museum’s launch at London’s Cabinet War Rooms in February 2005.

Marsteller, which is now creating signage for the space, won the work following a presentation pitch in March.

‘[At the pitch] we talked about a combined identity for the two venues [the museum and Cabinet War Rooms],’ says consultancy managing director Mark Rollinson.

There will be two executions of the identity, according to Rollinson. A primary, ‘corporate’ marque will be used on letterheads and brochures and a re-appropriated version will feature inside the venue and on signage.

‘In the identity we are trying to create a rounded picture of [Winston Churchill] in different periods of his life, rather than focusing on the more familiar war years,’ explains Rollinson. ‘The signage is a challenge because you can’t blast branding all over it, as that would destroy the historical setting of the war rooms.’

Exhibition design is by museum specialist Casson Mann (DW 12 June 2003). Director Roger Mann has developed an interactive archive of documents, films, photographs and soundtracks that are displayed by 13 computers and projectors on a screen 18m wide by 1m tall.

‘I didn’t want to carve up the space, so special effects are quite low,’ says Mann.