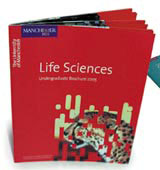 The institution is dubbed the UK’s first ‘super- university’ because it will reportedly become Britain’s biggest higher education centre, teaching more than 36 000 students. It appointed Lloyd Northover during the summer, to create an identity that would establish it as a key world-class powerhouse of intellectual excellence (DW 19 June).

The identity makes reference to the university’s heritage, but positions it in a more modern framework with a bright colour palette, according to Jim Bodoh, director at Lloyd Northover.

The brand will roll out across all signage, literature and organisations affiliated with the university.