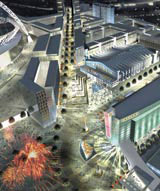 Friedman suggests that most of the mega-casinos in the US get it all wrong. British designers may soon have the chance to judge for themselves, as US gambling giants begin to flood into the soon-to-be relaxed British gaming market.

Under the proposed package of laws unveiled last week, up to 250 ‘super-sized’ casinos could be opened and allowed to stay open 24 hours a day, with up to 1250 slot machines. The Bill will come to the vote in the next Parliamentary session, and when the market does change, it will change forever.

‘The casino industry in the UK is not at all comparable to that in the US, or to the casino industry that will evolve in Britain after the new gaming law is passed,’ says Professor Bill Eardington, director of the Institute for the Study of Gambling and Commercial Gaming at the University of Nevada in Reno.

The British casino sector currently consists of a scattering of small establishments that require membership – which must be obtained at least 24 hours in advance – and are rarely able to offer more than a handful of gaming tables, under restrictions laid down by the 1968 Gambling Act.

But in the past year, companies such as Caesars Entertainment, Las Vegas Sands and Kerzner International – patrons of some of the most staggeringly grandiose design the world has ever seen – have already done as any self-respecting entrepreneur would do when a market dramatically relaxes its legislation, and are rapidly building their stake.

Caesars, the owner of Caesars Palace in Las Vegas, recently announced that it would build a £330m entertainment complex next to the new Wembley Stadium, in partnership with UK property developer Quintain Estates.

Meanwhile, Kerzner, the company behind South Africa’s Sun City resorts, is behind a £550m plan to transform the Millennium Dome into a casino, with 900 slot machines and a 600-bed hotel by late 2007. Leeds United FC recently sold a plot of land to Stanley Leisure for a similar purpose, while casinos are to be built adjacent to the Rangers, Sheffield United and West Ham football grounds by Las Vegas Sands, owner of the $1.5bn (£840m) Venetian complex in Las Vegas.

The major US casino operators clearly believe that design is a crucial element of their proposition – although possibly not in a spirit with which British designers will easily be able to identify.

Highlights of the Las Vegas strip include the Florentine palace of the Bellagio; the Mirage – a hotel with its own ‘volcano’, which erupts every half an hour, and an aquarium containing sharks; Paris, which recreates the French capital; and Luxor, which has its own pyramids, a sphinx and a replica of King Tutankhamen’s tomb.

Such constructions symbolise America’s high-concept consumer culture at its most extreme, and those who have dealt with casino operators fear their design objectives are unlikely to change on the flight over.

‘The big problem for designers will be trying to influence what the Las Vegas boys want to bring over here,’ says Callum Lumsden, managing director of Lumsden Design Partnership, appointed to create the betting shop of the future for bookmaker Coral Eurobet (DW 23 September).

However, the extent to which US casino giants can export their flamboyant visions is likely to be limited.

Under the proposed rules, gambling licences will be awarded in a three-stage process in which the local authority and regional planning body each carry right of veto, along with the UK’s future regulator, the Gambling Commission.

Eardington also suggests US trends point towards a less tacky vision of the future of gaming.

‘The new “state of the art” in Las Vegas is moving away from heavily themed properties toward modern and sleek,’ he says.

Architects such as Paul Steelman Design are in the vanguard of this new movement, which pitches casinos into a classier compartment of the mainstream. ‘The new British casino industry will be far more similar to the existing and emerging – non-Las Vegas – American casino industry,’ Eardington suggests.

UK designers may not get a chance to create the casinos, but The Forum Shops – a new mall at Caesars Palace in Las Vegas – raises interesting retail possibilities.

Ted Baker last week opened a 300m2 ‘concept boutique’ in the development, with the feel of ‘a modern classic regal home’, mixing black walnut floors, Chesterfield-style furnishings and upholstered panels with contemporary elements. Which goes to show, if casinos do bring their own gaudy style to Britain, there are worse things designers could do than play along.

Bus design a higher passenger priority than you think