YO! has been overhauled by consultancy Zag, in an attempt to “reposition the brand within an increasingly competitive market”.

The brand update includes the assets such as menu design, packaging and restaurant interiors, as well as a range of new dining experiences.

Aran Potkin, Zag’s managing partner, says that despite YO! being an “iconic” brand, it had “lost its sense of food and flavour, as well as the distinctive assets to be uniquely identifiable.”

Another challenge stemmed from an increase in rivals which also offer Japanese fast food like Itsu and Wasabi, according to Potkin.

Zag, which has been working with YO! for two years on the project, decided to put Japanese food at the centre of the update.

“Many people are stuck in a rut of eating pasta and pizza — literally beige food,” Potkin says. “We wanted to celebrate Japanese food in all its colourful glory.”

Three years ago, the restaurant changed its name from YO! Sushi to YO! and revealed a new colour scheme and logo. While that rebrand focused on Tokyo, with illustrations inspired by urban scenes, this update puts an emphasis on “authentic Japanese materiality”.

The previous branding, Potkin says, had been too focused on “Japanorama — faux Japanese graphics and imagery that had no authenticity.”

The new visual system is based on traditional Japanese artistic mediums, like woodcut, ink and aims to evoke a sense of cuisine. 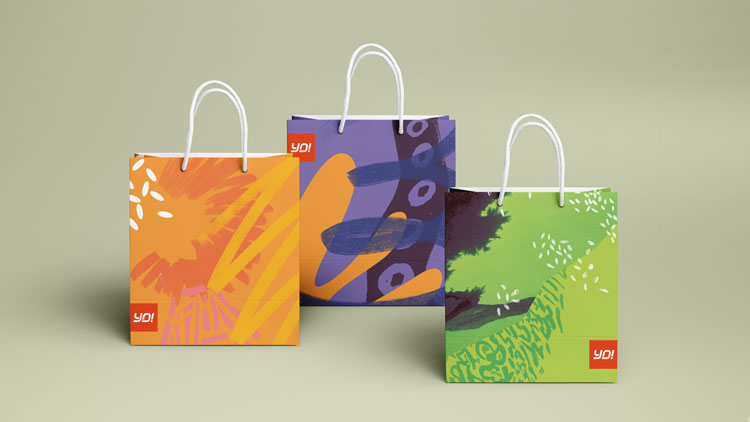 Zag’s design director, Lucia Vera, says that the brief was to “create a visual system around playful and flavourful food”. For example, one abstract design is inspired by tuna, and incorporates blue shapes and water colours in an effort to show the “texture” of the fish.

It was hoped that this would convey a feeling of spontaneity and encourage visitors to try different things, according to Vera. “We wanted them to talk about food and flavour,” she adds.

The graphic system — which had to be flexible given the chain’s scale — has been applied across menus, packaging and social media. 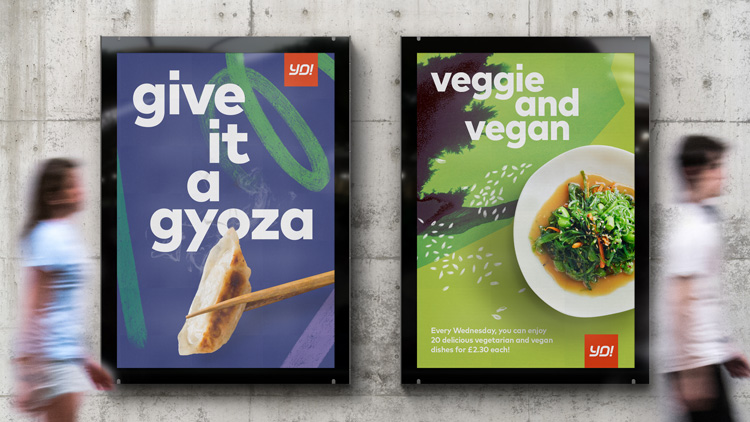 A digital advertising campaign also launches using these graphics, along with taglines that aim to highlight its diversified repertoire and dietary options, such as ‘give it a gyoza’ and ‘veggie and vegan’.

In an attempt provide a more cohesive brand identity, the logo and colour scheme have been updated with new guidelines for use across multiple platforms.

Three new restaurant experiences — targeting ‘grab-and-go’ and ‘premium-casual’ markets — will also roll out as part of the project. Architectural company Designtank has worked on the restaurant redesigns.

A ‘grab-and-perch’ branch will open in Manchester Piccadilly and an updated ‘Kaiten’ — the restaurant’s conveyer belt concept — has been installed in Ashford.

In Dublin, a premium dining experience will open in the new year. It is inspired by ‘Izakaya’, an informal Japanese pub, which is popular among professionals after work. A similar experience has opened at Westfields shopping centre in White City.

While the graphic branding is being rolled out to all stores, the restaurant concepts are isolated to these three locations. According to Potkin, they will act as a “blueprint” to see what is successful for the business.

The conveyor belts are staying

Any change will have to be considered carefully; the conveyor belts that are so closely associated with YO! are an inflexible infrastructure. Moving away from them would not only be an expensive re-structuring — there are over 100 YO! stores in the UK — it would require implementing larger-scale waiting services, Potkin says.

YO! is international, covering the UK, US, Europe and Middle East and serving over seven million customers every year. In November 2017, it acquired North America’s second largest sushi brand, Bento Sushi and last year, they acquired Taiko Good Limited, which produces sushi for supermarkets and supplies Waitrose.

Luisa Fernandez, YO!’s marketing director says: “The renewed focus on fresh and vibrant Japanese good will be enjoyed by customers across all our existing locations and new concept stores will help us remain relevant in the competitive fast-casual dining sector.”

Picks of the month: the best design events to catch in November