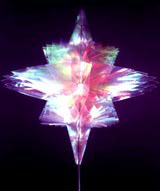 Boots the chemists has joined forces with designer Thomas Heatherwick to produce 3D in-store Christmas displays which will roll out nationwide in November. The decision to work with Heatherwick follows collaborations with other established designers including Harry Pearce and Michael Nash.

The artwork features a star icon, inspired by traditional decorations, which opens into a 140cm-high honeycomb-effect sculpture. Constructed from translucent paper, the star changes colour under different lights.

Three stars will be mounted on in-store gondolas at just above eye level – a total of 34 000 across the chain – to create a “sea of stars”, according to senior designer Elaine MacKay. “Simplicity was key to the design – it had to be quick and easy for staff to implement,” she says.

Heatherwick says retail Christmas decorations are often commercial and cynical. “I wanted to go overboard and create something that fills each Boots store. Retailers usually make a token effort with decorations but, just as homes look slightly empty come January when the decorations come down, I want consumers to notice the change in the New Year.”

Clean up at Holmes & Marchant