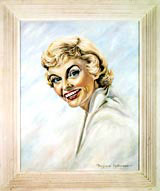 For the past 26 years, US artist Jim Shaw has been scouring second-hand shops, flea markets and thrift stores for a particular kind of artistic endeavour. He now owns more than 400 paintings, many of which would not be considered true art by the cultured and educated among us. For these are the enthused daubings of unknown amateurs, back-room painters who rarely get or even expect professional recognition.

He has brought his collection to the Institute of Contemporary Arts in London for its UK debut. There are portraits of women in various states of undress; there are still lifes, surreal landscapes and cutesy animals. Shaw arranges them in themes such as “beefcakes and cheesecakes”, “first ladies”, “psycho paintings” and “teenage fantasy”.

Matthew Higgs, associate director of exhibitions at the ICA, curated the show. This collection has been put together with a straight face, he says. Shaw is not leg-pulling, nor mocking the artists, even if the audience can’t help smirking. “There is a tenderness with which Jim has put it together,” says Higgs.

Regardless of the tenderness of the collector, some of the pictures are truly frightening, particularly the studies of the female form. Perhaps because they are mostly the works of enthusiasts, they display a lurid intensity.

So if they’re not part of the conventional art scene, what are they? “They’re much more connected with folk art,” says Higgs, “as there is a huge investment from the people who made them. Jim is fascinated by the underbelly of regional America and how it manifests itself.”

“I see the Thrift Store Paintings as an ongoing narrative about America,” Shaw said in a recent discussion with Higgs. The paintings may chart the country’s recent history, but it is a social rather than a political or economic history – they’re a reaction against theoretical education and are about real life, according to Higgs.

Whatever their underlying meaning, it is difficult not to treat them as so much kitsch. Higgs avoids this term, saying it has different meanings for different people. That may be so, and, indeed, for some of the gruesome swirls “kitsch” may be too generous a term.

Whether taste applies or not, a trip through the collection is good entertainment. And who knows, it might even inspire visitors to pick up a paint brush themselves. “It’s about a latent creativity that ultimately exists in everyone,” says Higgs.

Design jumps on board

Designers need their own space