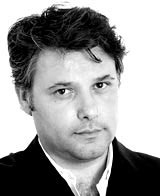 Award-winning designer Fernando GutiÃ©rrez is joining Pentagram’s London office as a partner, to build the multidisciplinary design group’s strategy of creating a “consultancy of design leaders”. His appointment takes the tally of partners worldwide to 19.

GutiÃ©rrez brings with him expertise in editorial design in particular. But, according to Pentagram partner Justus Oehler, his appointment is a personal, rather than a strategic one. “Fernando will bring a different cultural outlook to Pentagram,” he says. “He has close personal ties with our senior partners from his college days, including Angus Hyland, and we are greatly looking forward to working with him.”

Between two and four designers will join Pentagram with GutiÃ©rrez, from Grafica design consultancy – regarded by some as Spain’s up-and-coming design group. He formed the company with Spanish designer Pablo Martin in 1993 where, among others, he created the Friday supplement of Spain’s El Pais daily newspaper, Tentaciones, and Matador, a literary and photography magazine published in Madrid. He is due to take up his position at Pentagram in early October.

Pentagram has also appointed April Greiman as a partner at its Los Angeles office. This marks the group’s first presence in the city, alongside existing US offices in New York, San Francisco and Austin, Texas. With her motto, “design or die”, Greiman is committed to digital media, which she has helped introduce into the graphic design sphere.