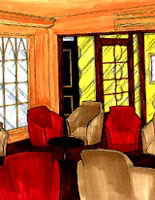 How refreshing to come across a new venture that has not been market-researched to death, that is not a pallid copy of an existing success story. And how unusual. These days it feels as if every start-up on the high street is either a close relation of Pret A Manger, or a shameless import from the US – or both. Think anything with the word “bar” on the end – coffee, juice, bagels, nails – you get the picture.

Here is a concept that has been born out of the passion of its creator. “I wanted to drink coffee and talk astrology,” says Priscilla, who, along with her husband Alan, prefers not to mention her surname. And the idea of the 12th House was born. A restaurant, cafÃ© and bar which serves good food and wine, with good service, but it’s also a place where Priscilla can chat to customers about their stars.

It’s an idea that she has been mulling over with Alan for the past ten years. She has been interested in astrology for longer still, having read the myths instead of fairy tales as a child. She describes her brand of astrology as more about psychology than how to meet a man. “It’s not prophecy; the thing that makes people most unhappy is not accepting themselves,” she says. This can be explained with the help of a chart, which you can order from the menu, based on your date and time of birth.

Priscilla, in her diamontÃ© studded glasses, will then be available to chat through the planetary configurations of her customers. She has her own interpretations of the zodiac signs, which have been drawn by artist Mark Done. So Gemini is represented by a ventriloquist, Sagittarius by a cowboy, Capricorn by a man climbing a mountain. “It should be a game and give people some instruction,” says Victoria Reid, who will manage the 12th House. Staff, too, are to be trained in all things astrological, and will sport T-shirts decorated with the word Priscilla has come up with to describe their sign, for instance, “caring” for Cancer and “success” for Capricorn. This, it is hoped, will also create topics of discussion.

This will take place in the west London site they have at last secured, off Notting Hill Gate on Pembridge Road, which opens in late October. Priscilla describes it as a seedy, funky street. Located over two floors, it’s a smaller site than they would have wanted, but the coffee chain-inspired boom has pushed rents up and made good sites hard to come by.

But this isn’t just an eating and drinking place. The hope is that the astrology will bring customers together, giving them something to chat about as Priscilla works her magic. And it will be a place, they hope, where people won’t feel uncomfortable if they come in on their own. “We all have this sense that the world is a smaller place and communications are faster, and yet people have fewer and fewer opportunities to communicate with each other,” says Alan. Maybe, he suggests, the coffee bar phenomenon has something to do with that. And anyway, as Priscilla points out, popular astrology started in the coffee shops. In the 18th century, these were the hang-outs where people would sit around and draw up their charts.

It will work hard as a site, staying open from 8am to 11pm. Upstairs, brunch will be served during the day, and in the evening table cloths and candles will appear to make the room feel less informal. While Priscilla and Alan have no catering experience, Reid has experience running her own cafÃ©s in Sydney and more recently ran London-based Urban Espresso.

Although the 12th House’s raison d’Ãªtre shares little with the coffee and fast food chains, the founders actively sought out the designers of Pret A Manger for the interiors and graphics. “Steve Turner’s very Virgo,” says Priscilla of The Formation’s head of interiors, “I always go for Virgos.” Alan, too, shares this star sign. Virgos, she says, are very hard working and good at details, are self-critical and modest and prefer not to take the credit. According to Priscilla, Virgo is the sign of perfection and order.

The founders deliberately asked for a look that was “over, rather than under furnished”, according to Priscilla, and a long way from the omnipresent minimalist approach. So the colours used in the interiors are warm and coppery and the armchairs are welcoming. “We wanted it cosy, comfortable and quiet, so you can hear yourself talk,” says Reid.

While the whole concept comes from Priscilla’s love of astrology, the couple did engage a market research company to see if there really was a market for the venue. Alan declines to name the group, only describing the exercise as “extremely costly and totally useless. Studies tend to be beautifully produced, but not based on sufficient data.”

Now, the 12th House is based on their own preferences and interests. This means good, simple, uncluttered food (Alan mentions thick chips and real trifle), and music ranging from classical to classics from the 1940s, 1950s, 1960s and later. “We are paying people the compliment of giving them the things that we like,” he says. “It is an expression of our personality.”

And now they have discarded the market research, there is no target market. In fact, Priscilla’s answer to the question “Who do you think the 12th House will attract?” is that she doesn’t know, although she’s not expecting many Virgos. Apparently, they are disbelievers.

If it takes off, and there is a real demand for Priscilla, they will consider bringing in other astrologers to talk about signs of the zodiac with the customers. “It’s nice [for the customers] to be able to talk about themselves,” she says. And opening other sites is also a possibility, particularly a bigger one.

While other entrepreneurs are trying to tap into the mood of the nation, Priscilla turns it all on its head. For her, this is a good time for astrology because Neptune is in transit in Aquarius. Hence the recent interest in spas, holistic healing, organic products, and the appearance of films like The Horse Whisperer, and the success of the Harry Potter books. This will continue, she says, for the next ten years.

Whatever the motivation, it was key that this did not become another themed environment. As The Formation’s Turner says: “It’s about giving somewhere more of a meaning.” ©

Priscilla spent the first meeting telling Steve Turner and The Formation’s creative director Adrian Kilby about each other. She saw the venue as being an oasis in a busy city where people could find a friendly atmosphere, says Turner. The restaurant’s name is consistent with this theme: there are 12 houses of the Zodiac, and the 12th House symbolises a resting period. ‘It’s almost like the place before birth and the collective unconscious,’ says Priscilla, ‘where we’re in touch with all the senses.’

‘The first conversations were about old tea and coffee houses where people debated,’ says Turner. The initial idea was for a lay-out comprising lots of little rooms, but this seemed ‘a bit furtive’, he says. The Pembridge Road site in London was chosen after an extensive search. Turner describes it as small, but a good location with reasonable passing trade. There is one room upstairs, one downstairs, a basement kitchen, and a tiny courtyard.

To create an ethereal feel, The Formation introduced the idea of large lenses. Priscilla explains: ‘We wanted something odd, something Neptunian, because the 12th House is run by Neptune.’ The 250 and 400mm convex lenses are set in the walls, to give distorted views.

To avoid a contemporary feel, the walls and ceilings have a copper finish. ‘We’ve harked back to old finishes, and the copper should make people look healthy,’ says Turner. Meanwhile, there are lots of mirrors with antique frames, and the curtains are made of sheer materials and heavy velvets. The seating is covered in deep burgundy and deep green suedes.

The 12th House clock logo appears on the outside of the building. The most obvious reference to the astrology is the zodiac signs which are mounted in the portals in the walls. ‘One of the main things was for it not to appear too weird. Quirky, but not weird,’ says Turner. A large blue clock, commissioned by Priscilla, goes through the different star signs rather than the hours of the day. And that day’s star sign will be printed on each receipt.

Downstairs, The Formation commissioned gargoyles to go over the bar. The original idea was to have gargoyles that looked like Priscilla and Alan, ‘but that was too quirky’, says Turner.

Upstairs in the dining area, each table has one high-backed, throne-like chair. This is the chair Priscilla can take if she is chatting or explaining the stars to customers.

The Formation also designed the website’s graphics, and packaging for some of the merchandise. The plan is to sell astrological-related products, and a range of aromatherapy oils – one for each star sign – has also been designed.