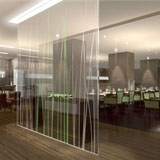 As part of a £60m refurbishment, InterContinental Hotels Group is reopening its London Park Lane hotel with an interior scheme by J2 Design in November. Hilton International is also poised to open its £40m new-build Hilton London Tower Bridge, located in Southwark, with architecture and interior design by Jestico & Whiles.

The InterContinental London Park Lane hotel design features a ‘homely’ environment with design cues that reference the hotel’s ‘Englishness’, according to J2 Design director Rebecca Roberts. As part of the project, which the consultancy won in 2004 following a pitch, J2 Design was commissioned to redesign the interior, including lobby, reception, bar, conference centre and restaurants.

For the scheme, J2 Design has created bespoke furniture and a series of chandeliers. The lounge bar is made from black fossil stone, which has been water-cut with a pattern and filled with resin and glass. Artwork, which has been designed to reflect the hotel’s surrounding area, is hung throughout the interior.

Additionally, J2 Design has created the interiors for ex-River Café partner Theo Randall’s first eatery, to open as part of the hotel. The restaurant – Theo Randall at the InterContinental – will focus on Italian food and seat 124. The interior includes a metal wall feature and a glass screen painted with blades of grass. The scheme is linked through to the rest of the hotel by the use of light, says Roberts.

‘The interior is very fresh, simple and English. For the hotel in general we wanted to update its look without alienating any of the existing customers,’ she adds.

The Hilton London Tower Bridge hotel, designed by Jestico & Whiles, is located in the More London development, which includes Lord Foster’s London City Hall. In contrast, the hotel will bring some of the more natural materials found in ‘old London’ into this corporate-looking area, says James Dilley, associate at Jestico & Whiles. This includes materials such as terracotta and copper. ‘This is a

different approach to the traditional hotel set-up because it is all one space,’ adds Dilley when describing the interior space.

• First-half financial results to the end of June showed a net income of £75.7m