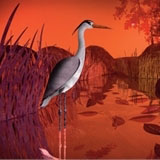 Peculiar has created branding and title sequences for the CBeebies’ Autumnwatch.

Peculiar director Hugo Glover says the programme is a ‘call to action for children to get more interested in nature’ and the group’s work, which was created by Glover and co-director David McCue, features four animations that are ‘naturalistic rather than computer-generated’.

‘We built the set and filmed it and then added in CGI characters,’ says Glover.

Autumnwatch airs from 2 October on BBC2 and CBeebies.