Rihanna’s latest show for her lingerine line Savage x Fenty took place yesterday, with an ambitious set design that transported viewers into the pages of the popstar’s diary and a psychedelic garden.

The singer, whose last album Anti was released in 2016, has been making waves in the fashion industry for a few years with her make-up line Fenty Beauty and her collaborations with sports brand Puma.

It’s her lingerine line Savage x Fenty that has attracted most attention, however. Last year, the first show for the underwear collection made headlines for challenging conventions. The show was praised for its inclusivity — featuring a diverse group of races, body sizes as well as models from LGBTQ backgrounds.

It was also unusual for the format itself. Unlike traditional fashion shows which typically last around 15 minutes, the show was an hour-long spectacle, more like a concert than a fashion show.

It helped that there were high-profile performers, including Rihanna herself. The models also performed choreography (instead of only walking up and down a catwalk) on sets designed by Willo Perron.

The expectations were high for the second show, which was held yesterday in New York. Unsurprisingly, the event was star-studded. The models included Cara Delevigne, Demi Moore and Paris Hilton while Lizzo, Rosalía and Bad Bunny were just a few of the performers at the event.

The show is currently available to stream on Amazon Prime Video and it includes behind-the-scenes footage of Rihanna planning the collection.

“You never want to repeat the same format” 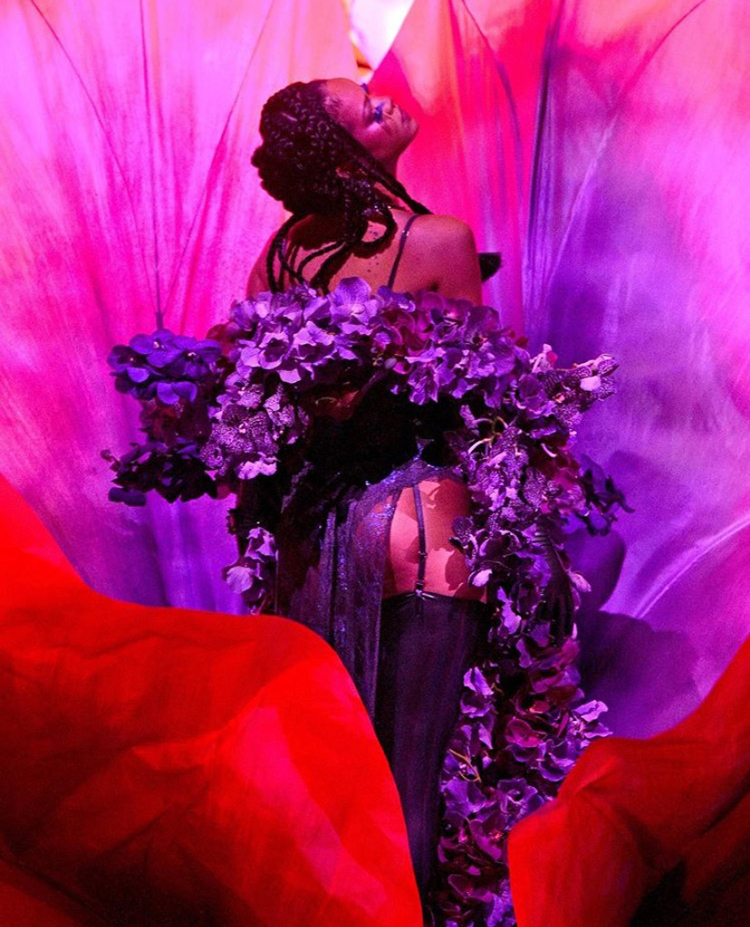 Willo Perron tells Design Week that the ambition this year was to do something “completely different” to the previous show. “You never want to repeat the same format,” he adds.

There were limitations to this year’s show. Because of the pandemic, there was no audience or opportunity to include a crowd’s reaction. He saw this as an opportunity to “have spaces that were totally immersive” and changed the “dynamic of a live performance”.

The concert-like structure has been developed for this year’s show. “I think we took it even further,” Perron says. “By having to remove an audience, we’ve to do this in sound stages — it has a different sensibility but more freedom to try different things within this confine.” 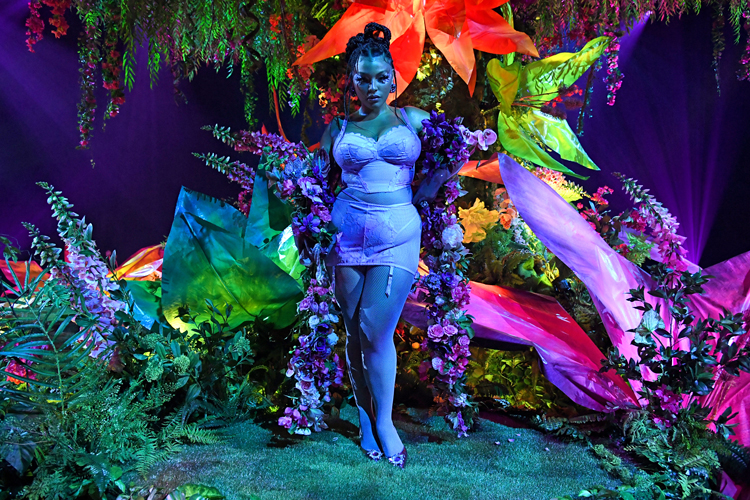 The LA-based multi-disciplinary designer also worked on last year’s sets, which comprised minimalist arches and were inspired by Moroccan architectural details. This year, the three different sets — Dear Diary, the Garden and the Factory — played with themes from the lingerie collection itself. “All the settings were inspired by this dream-state fantasy,” Perron adds.

The psychedelic garden-themed section was an “expansion from the flower pattern from the collection”, the designer explains. Featuring huge, exotic flowers and a soft mossy floor, models performed choreography to a soundtrack which included Frank Ocean.

Later in this set, popstar Miguel performed his song, Adore You. Perron is used to collaborating with big-name artists; his portfolio includes work with Drake, Mark Ronson and St Vincent. 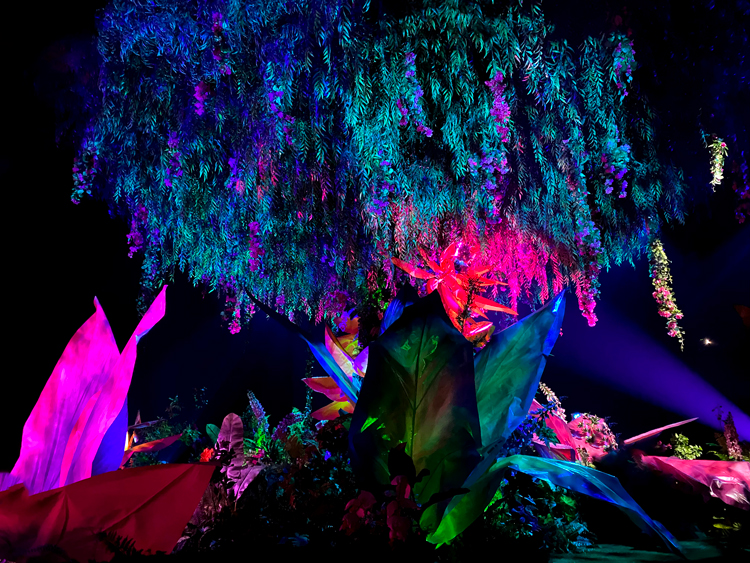 “The inside of somebody’s mind” 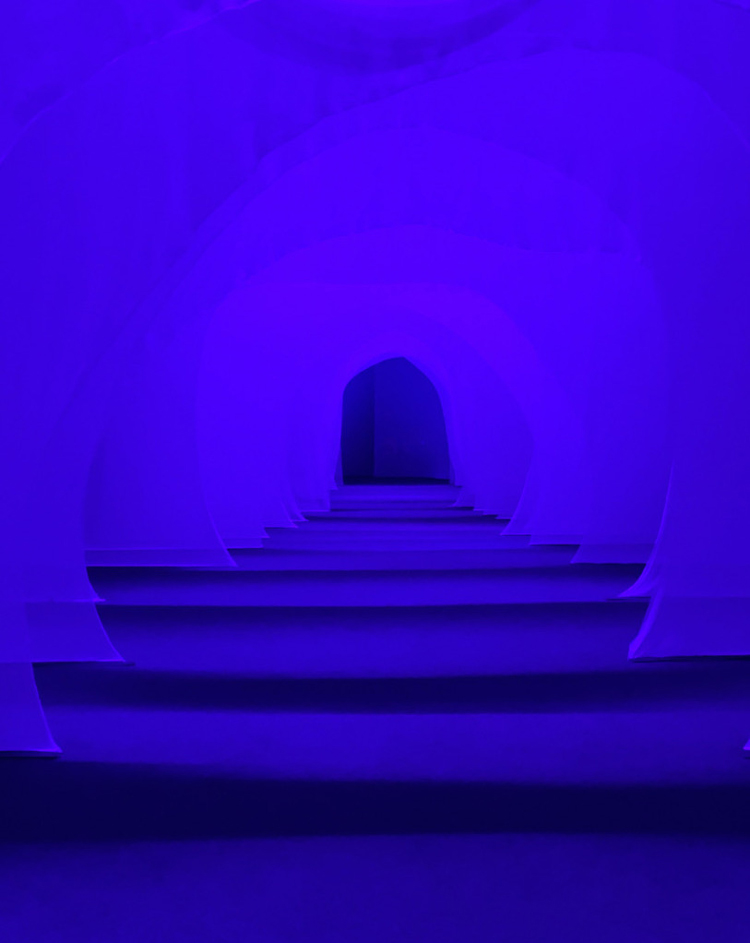 A more intimate look can be seen in the Dear Diary section, again inspired by the new season’s collection. Some of the lingerie features Rihanna’s handwriting and is based on her actual diary entries, Perron explains.

This inspired the tunnel-section of the show, which was designed to feel “like the inside of somebody’s mind”. The tunnel created a more traditional catwalk-like space, where moving images could be projected onto the plain background.

At one point, Rihanna’s writing appears on the background as the singer discusses her evolution from childhood. These more “intimate moments” appear to tie in with her discussion of sexuality throughout the show. 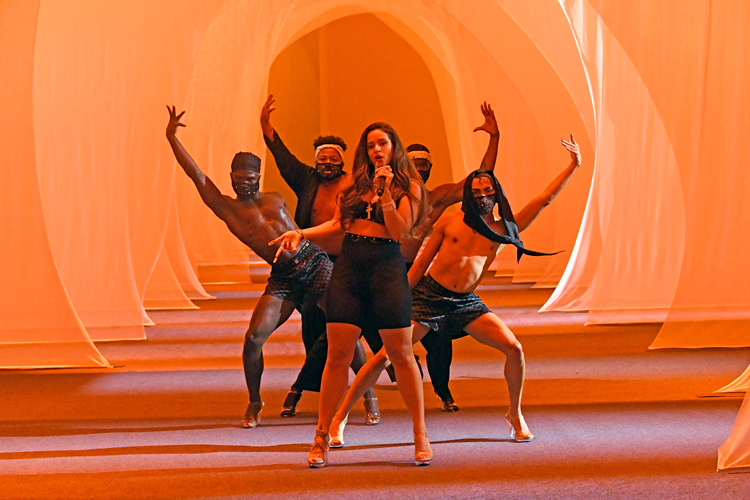 “The entire arc of the show was about the creation process”

The third section is a significant departure visually from these first two scenes. The Factory is designed as a kind of pared-back production space with fluorescent green lighting. The largest in terms of scale, the set comprises interlocking conveyor belts and tables which models and dancers interact with.

“The entire arc of the show — not literally or narratively — but for me, was the creation process into ideation into things materializing,” Perron explains. The “distorted factory” represents that process — “in order for things to materialise they have to be sewn and cut and shipped”. 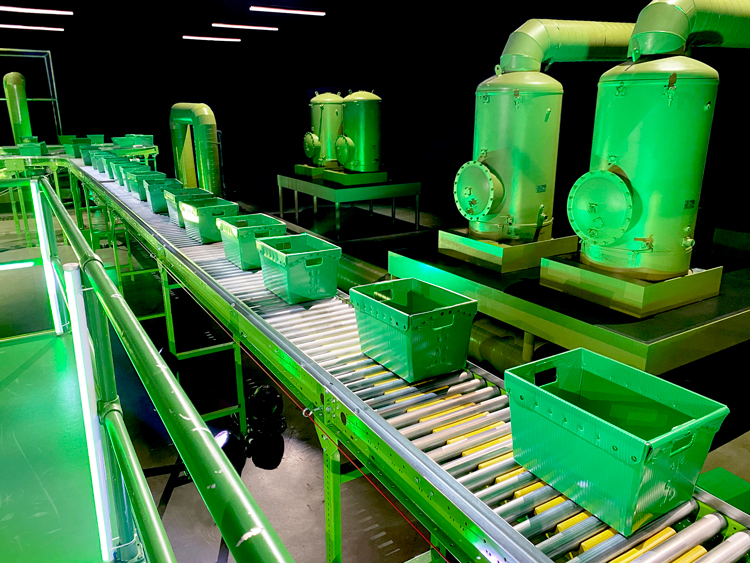 That final moment features another change in tone as the lighting colour scheme switches from green to red, prompting a more sinister tone for Scott’s performance of his song Franchise. 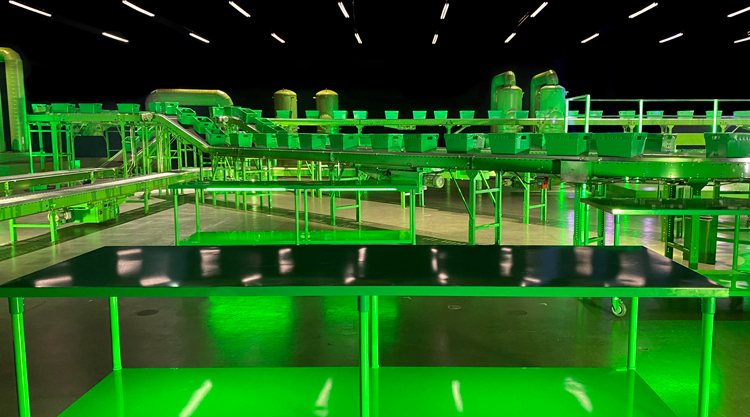 Picks of the month: the best design events to catch in October