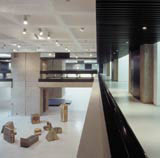 Much maligned and often misunderstood, the Barbican has always been a controversial development. People were hostile the very second that architects Chamberlin Powell and Bon presented their Le Corbusier-inspired Modernist vision to a shell-shocked post-World War ll Corporation of London. Now it is regarded as an architectural icon of the 20th century, but the complex has been a victim of its own inaccessibility. Poor signage and obscure entrances have often kept people away from its arts centre. Under the watchful eye of director John Tusa, things are changing for the better.

The latest phase of development is a major makeover of the Barbican Art Gallery. Thanks to £1m from the Corporation of London, the claustrophobic entrance and restricted sight lines have been banished. Architect Allford Hall Monaghan Morris has skilfully rediscovered the feeling of light and space that were vital elements of the original design. It removed a massive staircase, installed a new floor, and added 140m2 of display space. Best of all, it even exposed the Barbican ‘trademark’ bush-hammered concrete columns.

This all sounds impressive, but what exactly is on the visual menu? The revitalised gallery opens tomorrow with two shows. Downstairs there is a major retrospective of the late artist Helen Chadwick. Highly influential during and after her lifetime, Chadwick’s work is long overdue for reappraisal.

Upstairs, The Mexico Years by Tina Modotti and Edward Weston, presents a collection of 150 images brought together for the first time and gives them in-depth context. The American curator, Sarah M Lowe, an authority on both Modotti and Weston, has worked with the gallery to originate this exhibition and write the impressive book that accompanies it.

Weston’s work has been shown here in the UK many times. His images are referenced as the epitome of American Modernist photography. Modotti’s work, by contrast, has rarely been seen in Europe. Until the 1980s her work received little public attention, but in 1991 her Roses image from 1925 achieved the highest price ever paid for a single photographic print at auction. Even more amazing then, that her photographic career spanned only seven years.

Modotti was initially Weston’s model, then his apprentice and was soon an accomplished photographer in her own right. The two became lovers. They relocated to Mexico where Weston set up a studio. It was to prove a turning point for both of them. The three years Weston spent in Mexico had a profound impact on his work. Some of his best known images were produced after he returned to his family in 1926. See his new vision at work in the wonderfully formal and beautifully lit shells, vegetables and household objects.

In Modotti’s images we see a more compassionate view of Mexico – her work is concerned with the people as well as the objects and landscape. Ironically, it was her deep involvement with both the people and the politics of the region that eventually forced her to leave.

All in all this is a welcome return to form for one of the capital’s premier galleries and a continuation of its long history of must-see photographic shows.