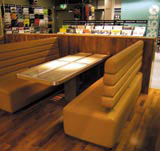 Record retailers have never been titans of the design world, perhaps because the browsing, largely male inhabitants of the record shop never expected much beyond alphabetical racking and a pinned-up copy of the singles chart.

To this day, it is safe to say that non-music fans who go into record shops just to enjoy the ambience account for an insignificant proportion of the footfall.

But the closure of prominent independent chains Tower Rec-ords and Andys Records last year was a shot across the bows of traditional record retailing. The imminent arrival of download retailers such as iTunes, Sony Connect and Napster 2.0 in the UK, combined with ongoing pressure from supermarkets which sell albums strictly as a loss-leader, have turned up the heat on the high street still further.

Now, more than ever, there is no single accepted way to sell records from a bricks-and-mortar base. The music retail industry needs to broaden its demographic to survive and stores need to be as appealing to casual buyers as they are to serious collectors.

‘If you are a specialist and you are selling exactly the same product as your rivals, you have got to create some kind of aspiration and give the public a reason to come into your stores,’ says an HMV spokesman.

HMV, which is comfortably the market leader among the specialist stores, is expanding at such a rate that its design template has been more or less entirely standardised across most of its 160 UK sites, although its flagship store at 360 Oxford Street, as designed by Greig & Stephenson, was the winner of the Theatre In Retail category in its own right at the Retail Interior Awards in 2000.

The raw elements of the chain’s pink-and-grey graphic identity have changed little over the past 20 years – indeed, the HMV dog, whose name is Nipper, has been the UK brand mascot since the first store opened in 1921. But in-store at HMV, technology sets the pace of change. Plasma screens and revolving tripartite window displays, as well as dozens of pieces of signage and a variety of lighting concepts, are the key facets of the retailer’s interiors.

‘The actual model and the way we lay everything out has been developed over many years,’ says the spokesman. ‘It is about maximising space and being able to support different music formats.’

The most startling retail success story of recent years in the music sector has been Fopp, which started life in 1981 as a market stall in Edinburgh and now occupies 14 sites in carefully chosen secondary locations across England and Scotland.

The chain’s industrial aspect, created and adapted on a store-by-store basis by Chris Stewart Architects, is a key complement to its wholesale, pile-’em-high sales proposition.

‘There is a language we have developed,’ says Andrew Cardwell, project architect on Fopp’s new Manchester store, which opened this month.

‘There are a few elements that give all the stores a family resemblance. The yellow bulkhead above the counter has become a signature thing for Fopp,’ he says.

New Fopp stores also increasingly incorporate graphic elements into the architecture. A large tiled logo, fired and laid down in the shop doorway, is a key feature of recently opened stores. Elsewhere, as the building allows, the elevation has been treated as a canvas in its own right. ‘At Manchester, Leamington and Reading, we have introduced large, back-lit graphics as part of the window,’ says Cardwell. ‘That is a thing we will be following up – trying to integrate the graphics into the buildings themselves.’

The presence of cafÃ©-bars in Fopp’s Manchester and Edinburgh stores reflects the increasingly experimental tendencies of the mainstream music retail market. Virgin Retail’s flagship Virgin Megastores model likewise drops Internet cafÃ©s, mobile phone concessions and, in the case of the company’s own flagship Oxford Street store in London, Europe’s largest musical instrument store, in among the CDs and DVDs.

Worryingly for the specialists, supermarkets such as Tesco and Asda have demonstrated that high street retailers can be aggressively challenged purely on the basis of pricing. Since the advent of on-line music, the death-knell of the specialist multiple retailer has been sounded more times than companies such as HMV and Virgin care to recall. Indeed, many believe specialist record shops that cater for a particular niche market are the only ones with a guaranteed future in physical retail.

At this end of the market, store design has the opportunity to be less conventional still. Carbon Music operates shop-within-a-shop concessions in Urban Outfitters stores in London, Dublin and Glasgow as well as the Fibre department within Selfridges at Birmingham’s new Bull Ring. It aims to generate a relaxed, social atmosphere at odds with the overtly commercial mood of the high street stores, creating lounge-style spaces in which people can simply sit and listen to music and keeping actual racking to a relative minimum.

Phonica, a vinyl specialist in London’s Soho which opened last year, adheres to a similar concept. The window display consists of a large circle of comfy chairs, while the racks and the listening decks are confined to the rear two-thirds of the shop.

‘It is different from pretty much any other shop you will find,’ says founder Mark Wadhwa, who launched the store as a showcase for the vinyl record itself, having already acquired two of the UK’s largest vinyl pressing plants.

‘It is anti-shopfitting, in a way,’ says Wadhwa, a graduate of the Royal College of Art. ‘It reflects my philosophy toward design, which is that you either go ultra-fitted or to the complete antithesis. Everything in there is very comfortable and from any given date and period.

‘We are about creating an atmosphere to hang out in and discover something. And, of course, if you sit in the shop you are going to hear music that you might then go and buy.’