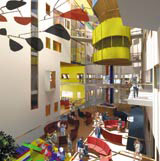 It is this kind of evidence, coupled with years of research, which led Wright to the conclusion that there is no such thing as a good or a bad colour. According to the colour psychologist, we do not respond to just one colour, but rather to colours in combination. For Wright, the key to successfully applied colour psychology lies in the recognition of tonal families of colour and how they relate to different personality types. Using this knowledge, Wright established a Colour Effects System, which aims to create colour combinations that are universally attractive. But, whether it be the Home Office requesting suggestions for vulnerable prison units or schools wishing to create a space with a calming effect, Wright will always interview her clients before applying any colour scheme in order to establish the desired effect.

According to Wright, ‘Nine times out of ten designers get cracking on the design first and worry about the colours later. They don’t realise that patients, prisoners or schoolchildren will respond to the design in the opposite order. Colour is the first thing we register, so it makes sense to tackle that first.’

Benedict Zucchi of the Building Design Partnership, who is designing interiors for the Royal Alexandra children’s hospital in Brighton, agrees colour shouldn’t be an afterthought. For Zucchi, it is an integral part of the design project. In the case of the Royal Alexandra, which is shaped like Noah’s Ark, it is used not only to enhance patient well-being, but also as a means of orientation. A banding of colour between every floor, for example, suggests which activities take place on that floor. For the purpose of orientation and to appeal to children, the hospital is structured like a rainbow: brighter colours indicate more active parts of the building; cooler and more soothing tones denote ward areas.

‘Colour as a means of wayfinding in hospitals is an absolute must,’ says Richard Mazuch of Nightingale Associates, a UK architect specialising in healthcare and science. ‘By colour-coding certain areas, you can start to omit graphics and create neighbourhoods. In doing so, moving around the hospital becomes a more subliminal activity, which can alleviate some of the angst,’ he adds.

Even after 28 years of specialising in healthcare environments, Mazuch says choosing colours remains a tricky task. Admittedly, there are some obvious rules of thumb, such as not opting for yellow backgrounds when it comes to checking babies for jaundice, or blue backgrounds in cardiac units, but Mazuch says designers still get it wrong a lot of the time.

In order to minimise error, he and his team rely on a mix of research, anecdotal evidence (such as the discovery that using orange in ante-natal units encourages mothers to lactate) and a strategy they developed called ’emotional mapping’. This involves identifying the rooms that will be used, as well as the condition and emotional state of the patients, before producing a design prescription. This work has resulted in a colour wheel, which maps every emotion that may be associated with a certain space to the colours in the spectrum. So whether you’re dealing with angst, fear, anxiety or stress, the emotion can be matched to a colour on the wheel. The key to getting colours right, according to Mazuch, is listening to the brief and understanding what it’s about; only if you’re able to determine patients’ traumas can you fully understand their needs.

Dalke has the last word. ‘When it comes to choosing colours, there is no point in prescribing anything, as every environment needs a different approach,’ she says.