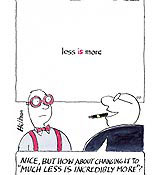 We begin today’s lesson with a question. Who coined the phrase ‘less is more’? (And while we’re about it, if less is more, what is half less? See later.) Note I said ‘coined’. Ludwig Mies van der Rohe is usually credited, but, though he popularised the phrase by using it as a personal mission statement, the words are those of the English poet Robert Browning. Others have made the same point – and equally economically, since to do otherwise would seem to defeat the purpose. Ludwig van Beethoven sought ‘great effects with little means’. Abram Games, in defining the poster artist’s task, was more concise and catchier with ‘maximum meaning, minimum means’.

William Shakespeare may have set the ball rolling with ‘brevity is the soul of wit’. Which brings us back to poetry. Arouet de Voltaire declared that ‘poetry says more, and in fewer words, than prose’. The truth of this you can easily prove by taking a favourite verse and paraphrasing it. Similarly, think of a great poster, a fusion of image and words, and deconstruct it. The message expands. This is not surprising. The marketing communication process from the initial assembly of facts to client brief to creative brief to ad or whatever is one of distillation. Games employs another metaphor. The design is a coiled spring that the viewer in touching releases.

So much depends on the brief and the respect with which it is treated. The brief has to be true, that is, an accurate and focused statement of what needs to be communicated, and the creative interpreter has to be true to the brief. I am suspicious of creatives who, confusing limitation with handicap, whinge about the restrictions of a brief without first mining it, exploring and testing its strengths. They are there – or should be. In Milton Glaser’s words, ‘the answer is in the question’. The great posters are triumphs of imagination set free by limitation. When the American poet Robert Frost was asked why he always worked in rhyme he replied that blank verse was like playing tennis with the net down.

Just as limitation is not handicap, so simple must be distinguished from simplistic. The simple solution will probably have been arduously arrived at. Keeping it simple isn’t stupid. That too is difficult, safeguarding the integrity of the execution. Others may wish to contribute, to add, to amplify, to qualify. Here’s Voltaire again. ‘The adjective is the enemy of the noun.’ How necessary is the adjective? Does it add anything apart from itself? Does it perhaps diminish? An adjective qualifies the noun – and an adverb goes one stage further and qualifies the adjective. Is more in fact less?

George W Bush said the other day ‘I’m incredibly optimistic about the economy’. Sigmund Freud would join Voltaire in having something to say about that. You’re right Dubbya, it is unbelievable. The language of his predecessor Abraham Lincoln was sparing of qualifiers. As was Winston Churchill’s. Try adding adjectives to any of his wartime speeches, then count the cost.

An American schoolteacher set his class the task of writing a ghost story in 100 words and without an adjective. He and I are not against adjectives – merely their overuse. Then, five minutes before the deadline he announced that they could include one adjective. The single jewel, of course, shone out.

Limitation is all. My first creative director made me draw an outline of the actual space booked for the ad I was writing; ‘Now write the ad in that.’

My first conference organiser (the International Advertising Association meeting in Stockholm) limited every speaker other than the keynote to 15 minutes. ‘This way we’ll have more speakers, each making one important point. It will be a smorgasbord.’

I recall a Variety Club Award lunch. That year Marty Feldman and Rolf Harris were joint winners. Feldman’s acceptance speech was first, hilarious, a bit long, but well received. Follow that, I thought, as Harris mounted the stage. He said ‘Little did I think when I left Australia that it would take this bloody long.’ He turned, sat down and got an ovation. The one thing I recall of the event are those 15 words.

Less is more. And for those who came in at the beginning: half less is Demi Moore.

All round good idea for a transport-based company