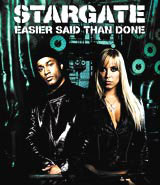 Attik has brought an ‘industrial glamour’ to the identity and visual styling of R&B producer StarGate’s first single in its own right, Easier Said Than Done, which is released next week. StarGate has previously worked on records for Mary J Blige and Sisqo among others. In contrast to the typically ‘slick’ image of the R&B scene, the work manifests a ‘grittier, more street-level attitude’, according to Attik senior designer Richard Smith. He adds, ‘We need to create an image that grabs the attention of the pop single buyer, but also appeals to more hardened R&B fans.’ The designs encompass CD covers and promotional material, as well as album covers and video sleeves, which will be released later this year.

Harvey Nichols customer who loves camping it up