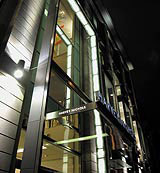 A week after the opening of Harvey Nichols in Edinburgh, its fourth UK store, you’d expect Patrick Hanly to be resting, deservedly, on his laurels. But the company’s jaunty, Irish-born commercial director is having none of it.

First, there’s the matter of the Fifth Floor restaurant at ‘Knightsbridge’ (all Harvey Nichols stores are referred to by location pet names; hence ‘Leeds’, ‘Birmingham’ and now ‘Edinburgh’). It’s undergoing a major refurbishment by Lifschutz Davidson and, come October, will feature a giant convex ellipse, covering hundreds of computer-controlled glass tubes, which sounds like something out of the next James Bond film. The bar is also being redesigned with stools that sway gently – or is that just the champagne? – and is set to open next month.

Then there’s the Four IV-designed Manchester store, which opens next year and whose L-shape is posing a few more ‘challenges’ than Edinburgh’s elegant, detached building; Knightsbridge’s menswear department, currently being overhauled by Hosker Moore Kent Melia along with swimwear; and shoe designer Jimmy Choo’s ’boutique’, also in Knightsbridge, his first store-in-store anywhere in the world, which opens this month.

A Harvey Nichols stalwart for 15 years, Hanly looks every inch the high fashion retailer. Tall and dapper with a zebra print-style tie and tanned glow, he rattles off Ã¼ber brand names – Earl Jeans, Pout, Trish McEvoy – as easily as most men his age recite the weekend’s football results.

He talks passionately about the role store layout plays in influencing the way Harvey Nichols’ customers shop. ‘[With HMKM] we are looking at store circulation and how we lay the product out. Key to our success is making the store easier for customers to understand. A lot of our purchasing is impulsive, and we have to persuade people to buy something by making it simple to find,’ he says. ‘Obviously, money is a key factor in people buying something on impulse,’ he adds, with a nod towards the well-heeled Knightsbridge clientele.

Hanly is concerned with design making good business sense. He mentions the addition of a second staircase in the new menswear department in Knightsbridge designed to improve access ‘which I think will really help business’.

‘Harvey Nichols is a business. It is vulnerable in one location – if there is a Tube strike or tourism takes a dive, we lose business,’ he says. ‘We became a public company in 1996 [the year Leeds opened] so have to offer our shareholders growth.’ Brands, he believes, are more likely to be offered to Harvey Nichols exclusively if it can offer them greater exposure.

It is the designer fashion brands, of course, that differentiate Harvey Nichols from its department store rivals such as Selfridges, Harrods and Liberty, which branch out into other goods, Hanly says. ‘Our customers see us as a directional company in terms of fashion, and we like to stock more edgy brands. People today are less brand loyal – women are no longer dressed head to toe in, say, Chanel as they were in the early 1990s.’

However, Harvey Nichols’ food offering is just as important, as it turns an hour-long shopping trip into a day-long shop-fest. Women in particular shop, have a coffee, shop, have lunch, shop, have afternoon tea in-store, he says. ‘That wouldn’t happen if we didn’t have hospitality,’ Hanly says.

Interestingly, Hanly’s use of the word ‘hospitality’ demonstrates a rather sweet approach to the store’s customers – that it’s Harvey Nichols’ duty to feed its weary shoppers who’ve been tirelessly spending their cash, bless ’em.

Hanly oversees all aspects of store design, including the hiring of interior design groups, from appointments to issuing briefs, which he enjoys immensely. ‘We have long-standing relationships with [consultancies],’ he says. Certainly, he has worked with Four IV for nine years, and is currently having weekly meetings with the group about Manchester.

On the subject of free-pitching, he is to-the-point. ‘Our major pitches always include creative work. Today’s reality is designers have to free-pitch to get noticed – working with Harvey Nichols, for example, gives them a high profile.’ Many would disagree with the principle, but Hanly says he tries to include ‘at least one’ group he hasn’t worked with per pitch.

He was pleasantly surprised when Leeds opened to find people were craving top-end fashion brands, and all indications are that Edinburgh is going the same way. ‘[Leeds’] customers wanted brands that were not available locally. They were more demanding than London,’ he says. Ditto in the restaurant. ‘People bought into the whole experience – they were drinking champagne at lunch and ordering £15 main courses, which is expensive for Leeds,’ he says.

It remains to be seen if the residents of other UK cities can be ‘Harvey Nichol’d’ too. The company has plans to expand Birmingham’s bijou format, ‘The Mailbox’, by Four IV, which features edited collections, to a further ten stores in cities such as Bristol and Nottingham.

It seems Hanly knows who is, and who isn’t, a Harvey Nichols customer and is happy for it to stay that way. ‘The first five days’ trading in Edinburgh were very crowded, but not all of them were Harvey Nichols customers,’ he says. But, to his evident delight, the first item sold was ‘a £15 000 jacket by Yves Saint Laurent’. So, the real order is happily preserved.

1978 Moved to the UK and joined Debenhams

1980 Moved back to South Africa, and Edgars, as merchandise manager

1983 Started The Burton Group. Transferred to Harvey Nichols in 1987, when it was purchased by the group. Became commercial director in 1996 when the company floated