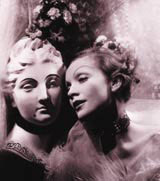 Remember My Fair Lady, the movie with Audrey Hepburn? The clothes and the sets, such as the monochrome scene at the races, steal the show. And who’s behind these designs? None other than Cecil Beaton, of course. Never one to be typecast, Beaton had been an actor, artist, theatre and set designer, art director, stylist and photographer. He was a dandy too, but above all else he was a visionary. His work displays a sense of purpose that is rare these days.

Long before Mario Testino, glamour and beauty were his stock-in-trade. Early on in his career he announced that ‘beauty’ was ‘the most important word in the dictionary’.

Whether shooting a studio session of some famous personage (Else Schiaparelli, 1936), a location portrait of an emerging artist (Lucian Freud, 1956) or a casualty of World War II (London bomb victim, 1940) his quiet, formal approach shines through. His use of light was exemplary. Here was someone in control of the craft, the technique, the aesthetic. In his work there was little room for the accidental. Even war was treated like a stage set.

These days designers are often wannabe photographers. After all, image making is so easy, so accessible. Why employ an expensive specialist when even the office junior is good with a digi-camera?

In the rush to achieve status, or save money and time, something has been lost. Not just the visual plot, but the creative spirit and energy that we see so clearly in Beaton’s images. A singularity of vision that is far more than the signature style photographers aspire to now. In a world over-saturated by images, few people display the qualities we see in Beaton’s work and none of them command his breadth of influence.

Last week another great 20th century visionary, Helmut Newton, died. His images were dark and satirical. They flirted with pornography and a different kind of glamour to the one offered by Beaton. Newton’s vision was irreverent and sharp-edged. It provoked and cajoled, prodded and questioned, but was never boring. Beaton and Newton had a massive influence on generations of image-makers, photographers and stylists.

Now that everything can be referenced and copied quicker than ever, it’s tempting to think that an individual photographer will struggle to exert such a pervasive influence again. To pursue a way of seeing and not be swayed by the latest video-diary/ docu-soap/ reality TV style or the newest benchmark design bible.

That’s why it is so refreshing to see the Beaton oeuvre again. It’s nearly 20 years since the last major London show of his work, at the Barbican in 1986. This exhibition is a reminder that it is possible to have a vision, see it through in an unswerving way and build a reputation and respect as an image-maker, using photography and whatever other means are at your disposal. Ultimately, there is nothing more powerful than ideas, inspiration and energy. Beaton’s work scores high on all counts.

Cecil Beaton: Portraits runs from 5 February to 31 May at the National Portrait Gallery, London