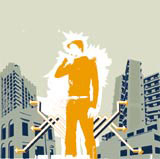 Industry opinions are divided on the current state of the freelance market. On the one hand, freelances are still much in demand to take up the slack at consultancies after redundancies and add an extra dimension to projects. But freelance budgets are still tight and freelances themselves are being cautious at the moment.

Although they can afford to be ‘cautiously optimistic’, says Fiona Watson, senior consultant at recruitment consultancy Periscope, clients have also acknowledged the current climate. ‘Everybody has been on a tight rein and consultancies are being careful with their budgets,’ she says. ‘Freelance has got little room to improve at the moment.’

Are design consultancies simply biding their time and waiting for business to improve? Paula Carrahar, director of Major Players thinks so. ‘It’s hard. [Consultancies] are taking on freelances, but they are really waiting for permanent staff to come round,’ she says.

Matt Muir, creative director of Ergo, isn’t even doing that. ‘It looks like things are picking up, but we’re holding off on recruitment for the moment. It’s not like last year, when we had three or four freelances,’ he says. It is a question of balancing priorities. ‘It’s a catch-22. We know it’ll pick up, but do we bring the people in first or the projects?’

Such caution is also evident on an individual level. Many permanent designers who were tempted to go freelance are now pulling back from the brink. ‘Permanent staff are staying on and keeping tight,’ explains Carrahar.

Priestman Goode, which is currently working on projects for Lufthansa and Hutchison, is reluctant to use freelances at the moment. ‘On the whole, we stick to our staff. If we need to take someone on for a particular project, we’ll bring them on full-time,’ says director Paul Priestman. When it does happen it will be ‘only if they have a specific skill we need’.

‘The problem with freelances is that they tend to be brought in at a time when there is panic. Freelances end up finishing things off rather than following them through from the beginning,’ Priestman explains.

Similarly, Event Communications creative director Cel Phelan is more comfortable using a proven in-house team because ‘you can be sure of the chemistry’.

But there is some hope on the horizon. Many recruitment consultants believe that 2004 brings considerable promise. Stuart Newman of Network Recruitment describes the current climate: ‘We have noticed a pick-up in the last two to three months, which is more confidence-related than anything else.’ He believes freelances are giving consultancies the extra horsepower needed to kick-start the industry. ‘Clients want one more product to push themselves over the top and [they] need freelances,’ he says.

Factory Design employed freelances before Christmas and it intends to do so in the future, says creative director Adam White. ‘We do not use freelances for creative work, but as facilitators for it,’ he says. Freelances tread a balance between ‘our needs and their skills’. ‘At the moment freelance model-makers are being brought in more than designers. There will always be a need for freelances, in spite of the past volatility of the market. They fill a gap as recovery begins. A lot of people were made redundant last year. What is left though in many consultancies is a core and now freelances are being brought in,’ adds White.

Jo Peters, director of Jo Peters & Associates, highlights the value of an outside view, an objective perspective that the freelance offers. ‘Some clients want really good concept people to brainstorm an idea, others want them to implement. Sometimes they are needed because they have a speciality or just because the client wants an extra pair of hands,’ she notes.

Watson believes the unpredictable state of the market at present can actually benefit freelances. ‘It’s a tough time economically, so good freelances will be a viable option for businesses,’ she says. ‘Clients are being cautious adding to their permanent staff, so freelances are being chosen.’ Freelances bring an added dimension, adds Muir. ‘We’re a small company, so certain jobs require a freelance,’ he says.

Adam Lloyd, who freelances, but has recently set up his own company, Artsworkinginside, says: ‘Clients will always pay for someone who can do the job properly’. But he also advises freelances to look at the wider picture as the industry moves forward. ‘I’ve been freelancing for over three years, but I’m diversifying now. I don’t want to put all my eggs in one basket,’ he says. Nonetheless, Lloyd remains confident. ‘The work is out there but it is a numbers game,’ he adds.

There may be more work available in some sectors than others. Newman believes graphics is more than five months ahead of other disciplines; he also thinks interior design is now picking up. Watson believes all disciplines are currently buoyant, particularly packaging, which appears to be the least affected by tough conditions. Peters believes this is down to the simple reason that ‘people will always need to eat’.

Elsewhere, digital is active, but it has redefined its role over recent years, says Watson. ‘It’s become a commercial element within consultancies and there are not as many dedicated new media people as before,’ she says.

Newman believes the demand for freelance product specialists will not increase as much as other disciplines because of the UK’s dwindling manufacturing capabilities. ‘[The UK] creates the best product designers in the world, but Britain does not produce anything any more. We are a service country.’

In-house design teams are a good place for freelances to look for work, believes Carrahar. ‘In-house companies such as Marks & Spencer and The Body Shop are taking on a lot of freelances,’ she says.

Whatever the sector, it’s all about meeting demand, says Newman. ‘There was heartache over the market not expanding,’ he asserts. ‘Now there are not enough designers. Freelances can pick and choose. If demand for freelances went up 20 per cent, we would struggle.’

Senior-level designers are most in demand. ‘You can’t afford to hold a junior freelance’s hand,’ says Newman. Watson agrees. ‘When freelances are paid by the hour, they need to be effective straight away. Juniors cannot necessarily sit down and get on with [work] in the same way.’

Newman feels the industry will sustain itself, but it needs to find its feet first. ‘The market is incredibly volatile at the moment,’ he explains. ‘It’s a lot better than it was a year ago but there is a lot of catching up to do.’

Newman is confident there has been a change. ‘Big companies are taking up big projects. If they can come to us then the market is definitely improving. It’s all about confidence.’ And talent, which is always in demand.

The consensus is that typical freelance rates have again not dramatically altered from 2003, but very few designers are earning more than they did last year, as Watson explains. ‘Freelance rates are fairly static, but then permanent rates have also remained relatively the same,’ she says.

Most companies pay day rates. Newman says this is because it’s cheaper in the long run. Rates fluctuate according to the consultancy: ‘Many clients are working for reduced fees, so they try to get a senior designer for a lower rate,’ says Jo Peters of Jo Peters Associates.

‘For companies, freelance is great for the short term, but for the long term it can get more difficult,’ says Newman, who believes ‘the Government doesn’t like freelances’.