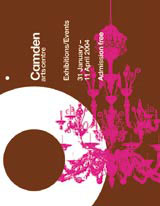 The Intro-created identity uses a customised Helvetica font and circular graphic device and will be applied to signage, stationery, literature and advertising.

Intro senior designer Julian House says the circular device can be used ‘subtly or emphatically’. ‘It’s strong but simple and can come to the fore or disappear into the background and allow the art to be more important,’ he explains.

‘The building was leaking, we weren’t making the best use of the space and families and people with mobility issues found the centre difficult to use,’ she says.

‘People often [mistook] us for a school too, so the brief also focuses on making [the gallery interiors] more visible from the outside,’ she adds.

Interiors work includes the creation of a new entrance and reception, a new build cafÃ© and the enhancement of the centre’s three gallery spaces and studio facilities, adds the spokeswoman.

The revamp also includes a garden designed by Muf, featuring a terrace based on the footprint of two homes that stood on the site and were bombed in World War ll. A glass fence provides security and acts as a sound barrier but meets the brief’s visibility requirements.