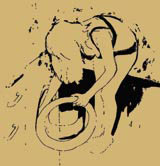 High-street fashion store Oasis has also caught the doodle bug. Since 1999, it has commissioned illustrators to create in-store graphics, carrier bags and promotional windows, among them Jason Brooks, established fashion illustrator Richard Gray, and Rachel Kelly and Deborah Bowness, who are known for their interactive wallpaper.

Why has illustration made such a spectacular comeback? ‘The trend was generated by illustrators and street artists, but industry and advertising are cottoning on to it. Bupa and Powergen have capitalised on the quirky humour of illustrators,’ affirms Gillian Blease, known for illustrations accompanying Richard Ehrlich’s ‘The Perfect…’ recipe column in Guardian Weekend. Her recent work goes on show at The Coningsby Gallery in London in October.

‘Most requests to see my portfolio in the past few months have come from blue chip companies,’ Blease adds. Nat Hunter, director of consultancy Airside, backs this up: ‘Illustration is definitely becoming more popular. We have recently completed campaigns for Surf washing powder, Lucozade and Hoegaarden.’

‘Companies are realising that consumers regard its personal touch as more approachable,’ believes illustrator Corinna Drossel, whose work can be seen at the Mambo Graduate Exhibition at the Mambo store on London’s Carnaby Street until 8 August. ‘Via illustration, corporations are seeking to create a warmer relationship with the consumer that had gone cold with the over-use of slick photography,’ says fellow exhibitor Damien Good.

True, an aesthetic backlash against the super-slick digital imagery idolised during the dotcom boom has helped precipitate the trend. Illustrator Kavel Rafferty – who has created a wallpaper piece for Top Shop’s Underwear Boutique at its Oxford Circus flagship store and prints for Inside Space’s Selfridges London concession – believes ‘illustration has a warmth that photography and computer-generated illustration lack’. Libby Sellers, curator at the Design Museum, agrees: ‘The swing away from an electronic and digitally remastered aesthetic towards a lo-fi, hand-crafted style was inevitable at a time when we are constantly assailed by slick computer graphics.’

It would be simplistic to suggest that illustrators are rejecting new technology. Democratic, accessible software programmes such as Photoshop have opened the way for experimentation that melds photography and illustration. ‘[Photographers] Nick Thornton-Jones and Warren du Preez have manipulated photos to look like illustrations,’ points out Laird Borrelli, author of Fashion Illustration Next, published by Thames & Hudson next month. Jasper Goodall experiments with pencils and felt tips, and then reworks the results on a Mac ‘to produce a more organic-looking feel’.

Lest we get too taken in by illustration’s romantic aesthetic, illustrator Paul Davis reminds us that it, too, is driven by economic expediency. ‘Editors find it cheaper,’ he says. ‘They don’t have to deal with stroppy photographers interpreting the stylists’ concepts after enjoying the on-location catering at a four-star hotel and flying business class. Think of the savings!’