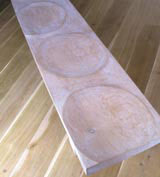 He has been referred to as a furniture designer, contemporary benchmaker, designer-maker and woodworker. So which is the more accurate description? All and none, it seems. ‘These [descriptors] aren’t mutually exclusive,’ he says. ‘I work in all these areas. In the craft field, there are fewer studios and makers than, say, 20 years ago.’ This may explain Partridge’s reluctance to be cast as a purely craft designer.

But it was the Crafts Council, back in 1981, that first got him off the ground, and he’s still grateful. ‘It gave me a sense of acknowledgement, a kind of validation,’ he has said of his setting-up grant. ‘The Crafts Council does a great job,’ he adds. ‘It is people-centred and enables young designer-makers to get started.’

Garden furniture (if that doesn’t make it sound like plastic chair and umbrella sets) has formed the bulk of Partridge’s output. The current vogue for ‘designed’ gardens, and the treatment of gardens as an extra room, has helped him along. ‘People are prepared to pay for my work and not think it is ludicrously expensive,’ he says.

In the past few years, he’s made the ‘quite conscious’ move towards urban and interiors projects, often working with architects on private commissions. ‘I became aware that I was being pigeonholed as a rural designer, so I started to nudge my work towards urban projects,’ he says. His first such work was a bridge for the Quay Arts Centre on the Isle of Wight, with architect Tony Fretton in 1997.

Partridge is occupied with a range of projects at the moment: another footbridge, in Snowdonia for a private client; outdoor, semi-public benches for a development off King’s Road in London; a table for a fashion company; and umbrella stands for Warwickshire arts museum Compton Verney. He has also designed a prototype freestanding lamp for the Jerwood Prize exhibition. It was made by splitting open a vertical plank of wood at the top and bottom, and trapping a light inside.

On site-specific work, and, indeed, most other projects, Partridge always collaborates with partner Liz Walmsley. They discuss, debate and challenge each other, and they have worked this way since 1986. ‘We work on most things together – I probably do a bit more chainsawing,’ he says. Every time he talks of his work, it’s in terms of ‘we’ and ‘us’, not ‘I’.

Then there is the phrase he used on his Jerwood application: ‘[My work has] embraced the challenges presented by site-specific projects without compromising its own personality’. What did he mean? ‘I was trying to explain that I feel inferior to “proper” designers, who create pieces for a mass audience, compared with my one-off pieces, and that creating site-specific work gives you more purpose,’ he says. ‘There’s a reason a particular seat is in a particular place, and it helps me to justify what I do.’

If the Jerwood recognises Partridge the second time round, he will be even more validated – and may just need that extra barn after all.