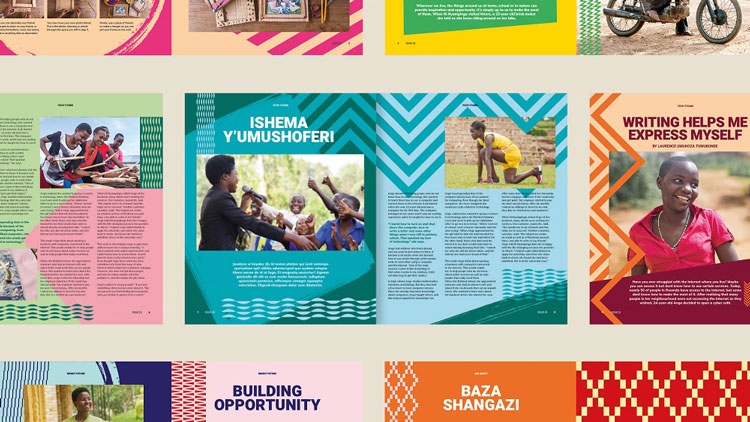 Run by the non-profit Girl Effect, Ni Nyampinga magazine aims to empower girls across Rwanda to make choices about their health, education and economic future. Studio Output worked with the magazine in an attempt to create a stronger digital presence. Colour palettes were adapted for digital platforms, while still taking inspiration from Rwandan culture — a red from the country’s soil, and charcoal tones from national artwork. The studio provided a framework of image types for the magazine — such as contextual shots to aid storytelling — so that it would be easier for content creators to narrate their content. Studio Output also created a toolkit, including colour palettes and font types, to display the magazine’s content in the most appropriate way, depending on the platform and audience.

Superunion Asia has created a campaign video, featuring entirely paper animation, for the 200th anniversary of the stationery brand Collins. The design consultancy worked with Light and Shadows Productions, a Vancouver-based film studio, to create a video that celebrates the brand’s history. It follows the founder, William Collins, from his roots in Glasglow to making diaries for the Queen and finally to the company’s international expansion. There are two shorter videos which aim to celebrate the brand’s craftsmanship as well as its modernity. The social-led campaign will be launched in Singapore, UK, Australia and Japan. 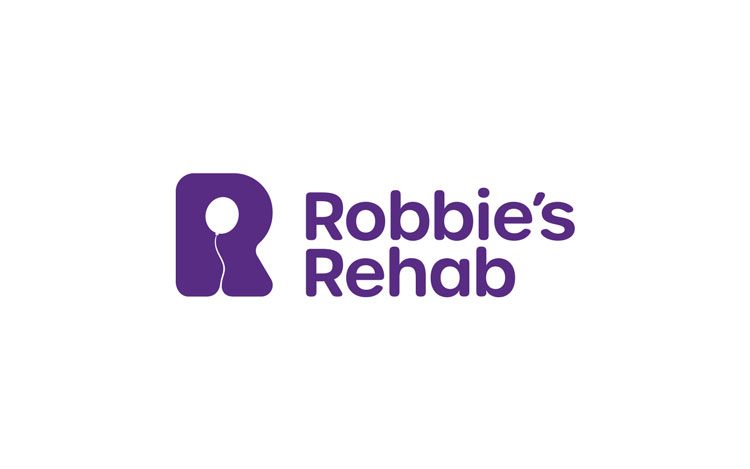 Designhouse has provided children’s cancer charity, Robbie’s Rehab, with a new visual identity, which aims to invoke “innocence, happiness and childhood.” The charity is named after Robbie Keville, who died from a brain tumour aged 10, in 2016. The simple logo features a balloon infill, which is a reference to Robbie’s classmates who meet annually and release a purple balloon in his memory. All the branding is purple, which was Robbie’s favourite colour. The updated font is softer and the infill illustration is adaptable — it can be replaced with a trainer for a running event or a musical instrument for an entertainment event. 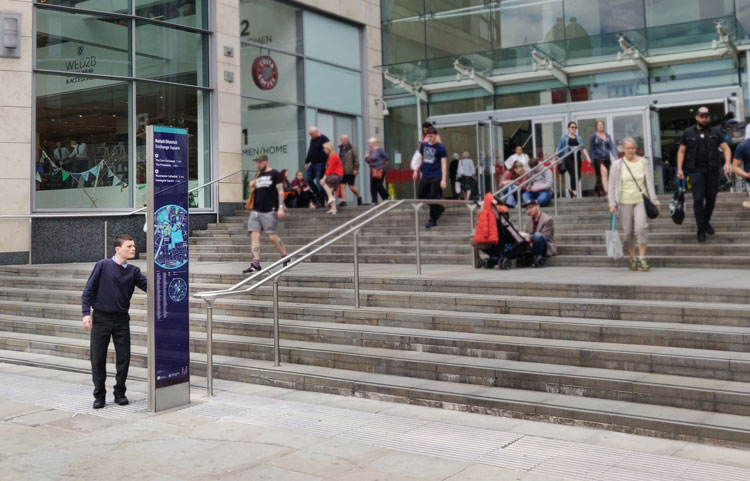 28 new signs have been installed at prominent locations in Manchester in an effort to make navigating the city’s cultural, historical and retail districts more easily. The new system aims to “declutter” the old wayfinding infrastructure, according to Weston Williamson + Partners, the urban design practice behind the project. A new city centre map has also been created, in keeping with the “fresh and vibrant” design of the totems. “We’ve tried to infuse the pride and energy we’ve encountered in Manchester into the totem design to create lasting and representative landmarks,” says Sarah Manning, director at Space Agency, the wayfinding studio who also worked on the system. 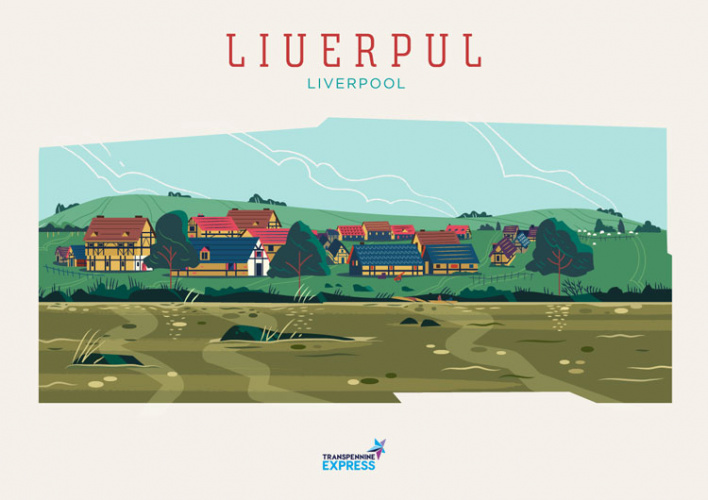 In Medieval times, the North of England was defined by its battles, and while a lot has changed since, the areas still bear signs of that history. An illustration series, by Sounas Design and published on the Transpennine Express website, aims to educate people about the names of the places they are visiting or call home. For example. Liverpool’s name dates to the 11th century, translating to “creek with muddy water” in reference to the River Mersey, which runs through it. Sheffield’s original name, meanwhile — “Shethfeld” — translates to “forest clearing”. As well as providing background information, the illustrations highlight the humble origins of these now-bustling cities through pared-back design. 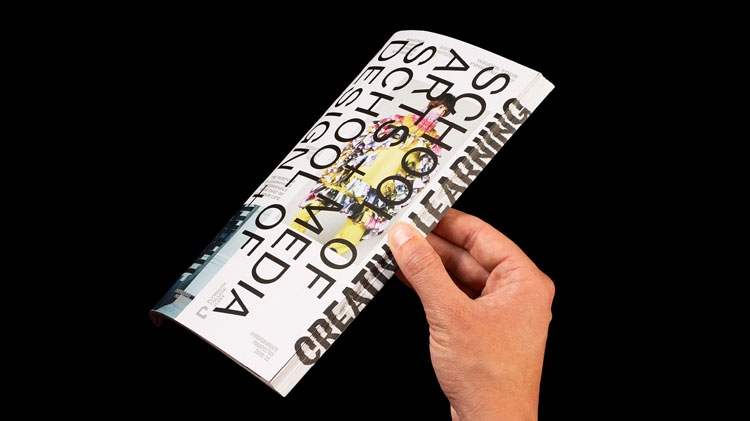 Templo has designed a 2020/2021 prospectus for Plymouth College of Arts, which aims “to put creative education back on the political agenda”, the design studio says. The book plays with the idea of the college’s DNA social justice and creative learning — and incorporates it into the physical design. When the fore-edge is bent backwords, it reveals the words “Social Justice”, and when it is bent forwards, it says “Creative Learning”. The book is made from fully recyclable materials, including the rubber bands which are composed of recycled car tyre inner tubing. 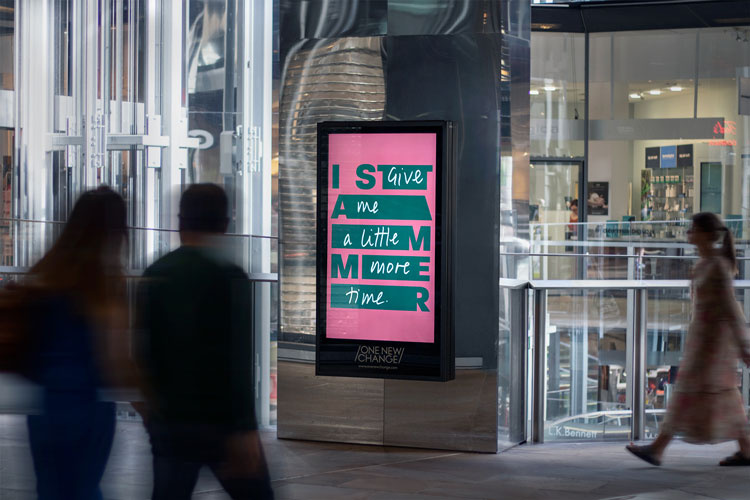 Zag has created a campaign for the British Stammering Association which aims to change the “public perception of stammering”, according to the growth consultancy. In an effort to reach a wider audience, Zag also advised the charity to change its name to Stamma. The visual campaign features stretched out typography to “represent the pauses in conversation that are so familiar to people who stammer”, Zag says. Those spaces are filled with the “inner thoughts and frustrations” that often remain “unspoken”: “I’m not nervous”, “I haven’t forgotten my name,” or “don’t hang up on me.” Stamma hopes that the campaign encourages people to be patient with people who have stammers and reduce stigma around the speech disfluency.

A Day to Remember, by Case Furniture 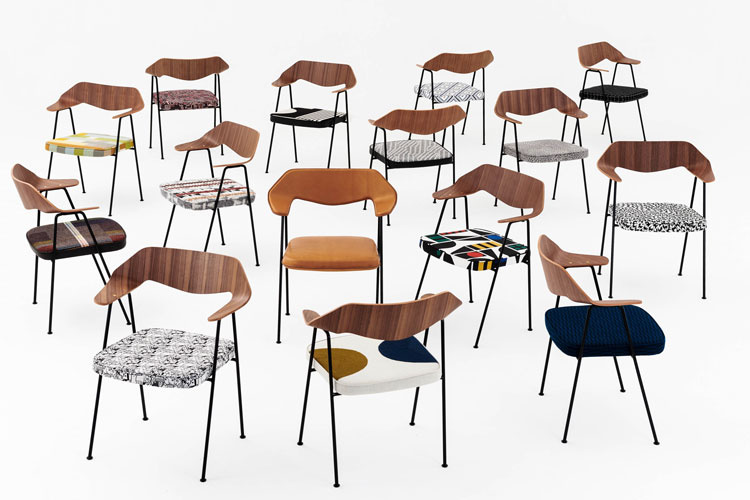 15 designers have paid tribute to British designer Robin Day with interpretations of his iconic 675 chair, that will be auctioned off in aid of the Robin and Lucienne Day Foundation, in support of young creatives. Run by design company Case Furniture, the project features leading figures from the textile industry — such as Eleanor Pritchard, Donna Wilson and Charlene Mullen — who have all put their spin on fabrics for the chair model. The bespoke chairs will go on display at the Heal’s flagship store on Tottenham Court Road, from 1-21 August. 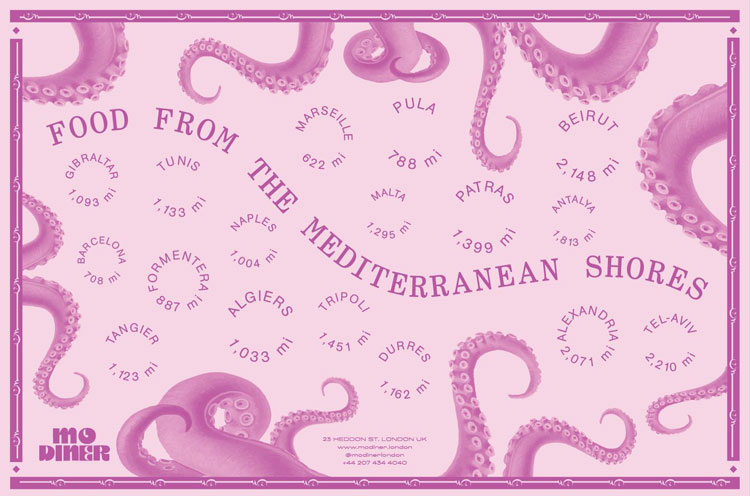 Los Angeles-based design studio WP&A has created branding for the new London-based restaurant, Mo Diner, which opens this summer. With a pastel colour palette and Mediterranean food, the restaurant is a modern take on the traditional American diner. Playful place mats feature illustrations of the food, with distances from various Mediterranean locations to the restaurant as well as dot-to-dot puzzles to fill in. The pastel theme continues across all branding, from smoothie stickers to toilet signs. WP&A has also created a series of scratch lottery cards which offer customers the chance to win prizes, such as meal discounts. 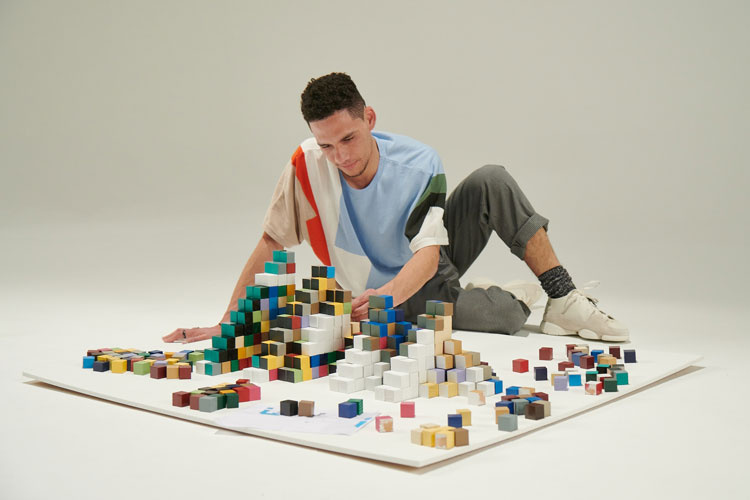 In January, ITV announced a year-long project to change its idents every week, using work from graphic designers, illustrators and photographers. Over July and August, young designers from graduate schools across the country will be featured. The brief was to create sculptures that could be animated, and that were related to the work of the broadcaster, playing with themes such as technology and communication or a designer’s personal connection with the channel. For example, Ash Kayser, from the University of West England, created a version of the company’s logo made up of small cubes, which represent the fragments of his memories of watching ITV when he was younger.