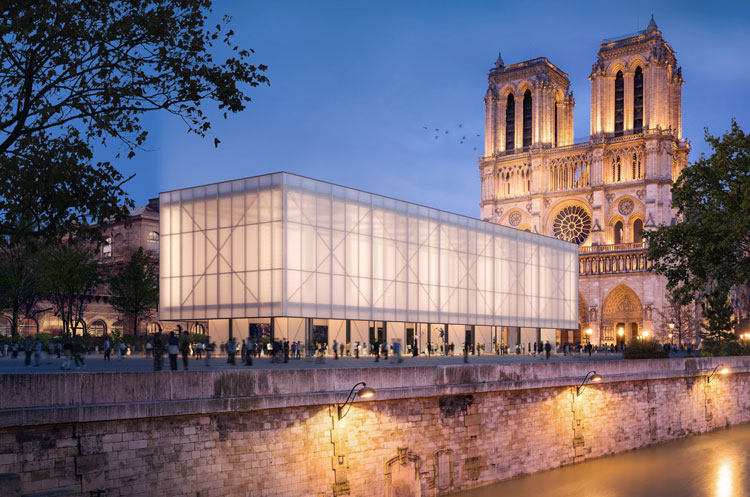 Gensler has revealed designs for its “Notre Dame Pavillon”, which would be temporarily installed in the cathedral’s adjoining square during its restoration period.

On April 15, the Parisian cathedral’s spire and most of its roof was destroyed after a fire broke out in an attic. Around one third of the church’s roof remains.

Gensler’s concept is a response to calls from the church’s rector, Bishop Patrick Chauvet, for a temporary structure to be built to meet public demand for a place of worship.

The cathedral was already undergoing renovation before the fire, with experts predicting that reconstruction could take decades. 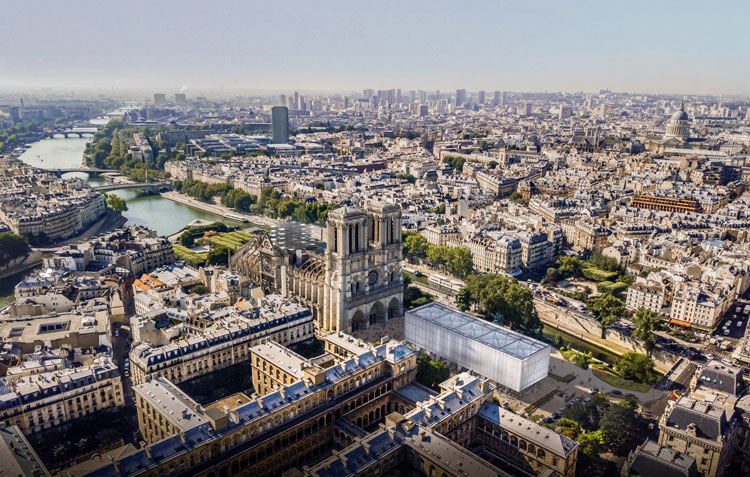 Duncan Swinhoe, managing director at Gensler, says that the concept provides “a practical solution for the community” while also “giving them a place to pause and reflect”.

The temporary structure is “reminiscent of the structural rhythms and forms of the Gothic cathedral”, according to Gensler.

It will be made from primarily from charred timber, which serves as a “memorial” and also “signifies the hope that can be born of disaster”, Swinhoe says.

The material is also “tactile, warm and natural” with “added strength and durability”. 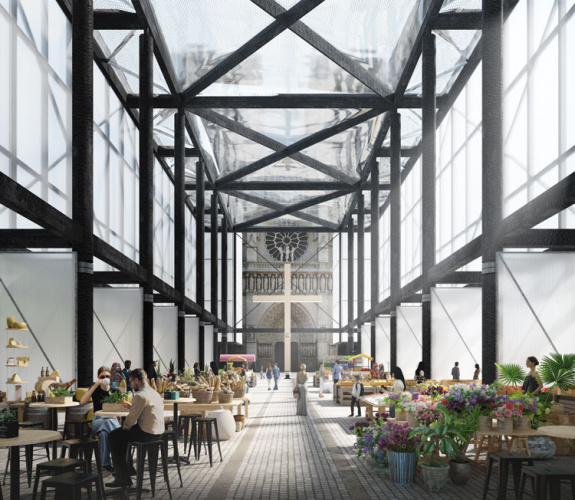 Swinhoe says that charring, “one of the oldest and most effective ways of protecting wood from fire, also symbolises that what once destroyed Notre Dame only serves to make it stronger”.

“It expresses a language of rebirth and transformation,” he says.

The roof will be constructed out of EFTE — a translucent plastic — and the polycarbonate walls will also be translucent.

These materials, Swinhoe says, “create a space that is flooded with light and emblematic of Paris, acting as a beacon of hope for Parisians and the international community”. 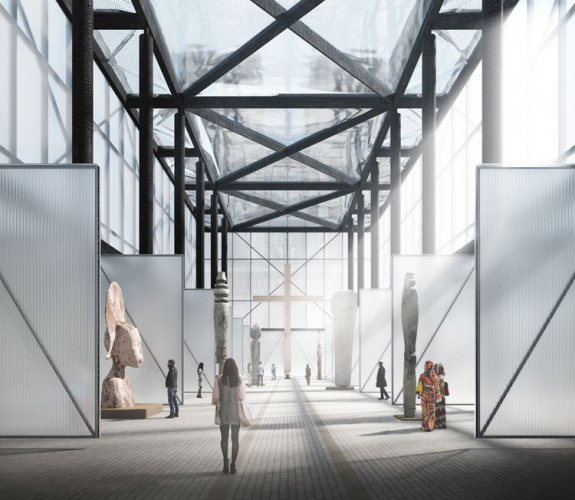 It will be visible all over the city, from multiple viewpoints, including the Eiffel Tower.

Swinhoe says that the design is “deceptively simple” in the hopes that the structure remains “respectful of the cathedral and sits as a place of reverence as Notre-Dame is restored”.

Inside, the design “mirrors the configuration of Notre-Dame”, Swinhoe says. It will be able to receive up to 800 people for mass services.

Community, and not just worship, was another focus of the design.

The “flexible” interior means that the space can be used for gatherings for the “entire community”, as a dining or exhibition space.

Swinhoe says: “We also wanted to reflect what cathedrals were always intended to do — bring people together.”

Gensler has not confirmed whether the designs have been seen by Chauvert.

The concept is not the first of its kind for the cathedral. Stockholm-based firm Ulf Mejergren Architects has proposed a swimming pool that would cover the roof, while other outlandish suggestions include a greenhouse roof or forest area.

The French government has also announced an international competition to design the church’s new spire, with prime minister Édouard Philippe saying that the spire should be “suited to the techniques and challenges of our time”.