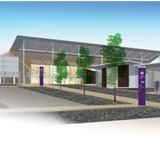 A £1.4bn scheme to reinvent the retail park is being rolled out by developer The Junction Partnership under a concept masterminded by retail design consultancy Hart D’Lacey.

The first of six Junction parks this year will open at a 17 000m2 site in Wembley, north London, in September. It was developed in collaboration with Brighton architect Urban View and forms part of the Wembley Regeneration area.

Introducing on-site customer services, such as showers and childcare, and featuring contemporary, multi-format architecture, rather than identical warehouses, the developments aim to transform the retail park shopping experience, according to Hart D’Lacey managing director Sam D’Lacey.

The Junction Partnership and Urban View appointed the consultancy to give the retail parks an identity and a personality. ‘They realised they needed more than an architectural solution, with more identity than retail parks have historically had, when they’re a series of boxes and a car park. We are trying to give it some kind of face, so it is not just a collection of other brands,’ says D’Lacey.

This identity will be partly achieved through a distinctive £1.75m Pod building, housed on each park to contain customer services and attractions. The retail parks will also offer spaces for local traders to take units on a rolling basis, creating a dynamic environment with more unusual retailers.

A further six sites are set to open this year, ahead of a redevelopment of the rest of The Junction Partnership’s portfolio of 19 sites in the UK.

Nokia flagship for London as part of worldwide drive