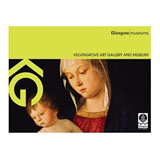 Glasgow Museums’ Kelvingrove Art Gallery and Museum is reopening next month following a £27.9m refurbishment, featuring exhibition design by Event Communications and a brand identity and wayfinding scheme by Fitch.

The reconfigured gallery and museum has been repositioned as a more visitor-friendly organisation. It will increase its floorspace by more than a third, with a new temporary exhibition area, a conference and lecture theatre, education rooms, a restaurant, shops and various study centres. The architect on the project is BDP Architects.

Fitch has designed an identity for the museum in a lime green colour palette, comprising a series of sub-brands, which are being applied to the new spaces. It is the first time the museum has had a comprehensive identity linking the gallery areas with a common look. The identity has been designed to contrast with the intricate detail of many of the exhibitions at Kelvingrove.

‘We wanted to make a direct, bold and uncomplicated statement that was simple and iconic,’ says Leigh Chandler, senior designer at Fitch.

The consultancy has also created a colour-coded wayfinding system, comprising more than 750 signs, stretching across three floors. Fitch was appointed to both projects in 2003 following a pitch. ‘The key was to stop thinking of it as an institution and start thinking of it as a leisure and destination brand,’ says David Roberts, design director at Fitch.

Event Communications has designed a bespoke flexible display system for Kelvingrove, which can be altered as exhibitions change. ‘The space is challenging because of the sheer variety [of exhibits], so we needed to create a system that could respond to the changing environment as objects move around,’ says Esther Dugdale, a senior designer at Event Communications who has been overseeing the project.

Kelvingrove reopens to the public on 11 July.