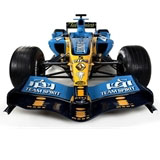 It is when you see pictures of Formula One’s glorious past that you realise what has been lost. There is more than a rush of nostalgia seeing images of legends such as Juan Manuel Fangio in an Alfa Romeo or Jim Clark in a Lotus. You are also reminded (if you are old enough) of a time when the cars and their drivers all had supersize personalities.

Since Ayrton Senna’s tragic death at the wheel in 1994, the sport has been starved of charisma. Now the drivers are as technologically proficient and characterless as the cars, and a train-spotter mentality is needed to tell them apart. Nevertheless, the current cars are masterpieces, representing the very 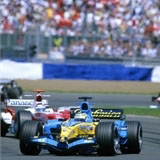 summit of current technology. They’re largely the fruits of the cottage industry in the UK that has grown around the sport, though, as car manufacturers such as Toyota, Honda and BMW extend their control, so does the input of the specialist names diminish.

Formula One is now a very richly endowed global concern, and a cynic might suggest it’s the sport’s deep pockets, rather than anything else, that leads to the Design Museum’s forthcoming exhibition. But the show does pose the question of where design ends and engineering begins. Apart from performance, the liveries of the current cars are the one area of differentiation, and this is where you could legitimately talk about design, not to mention that of the exhibition itself by Studio Myerscough.

GLA creates a unit for design and architecture