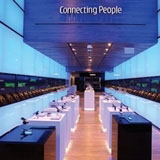 Nokia is planning to launch its flagship ’boutique’ retail format in London’s Regent Street next year, following the first in a series of worldwide openings in the US last week.

The world’s largest mobile handset manufacturer is working with design consultancies Tomato, Hi-Res and Universal Everything on interactive content for the stores, while interiors are by US consultancy Eight Inc, the group behind the interior design of Apple Computer’s global flagship stores.

Nokia is thought to be in negotiations to take a unit in the former Dickins & Jones department store on Regent Street, although this has not yet been finalised. A spokesman for the company confirms that London is a target city for the flagship roll-out, but declines to comment on the timing and location of an opening.

Helsinki, Milan and Hong Kong are also thought to be lined up for the forthcoming stores, following the launch of an outlet in Chicago last week and a site opening in New York’s Fifth Avenue in the autumn. ‘We will open several Nokia flagships in the major shopping cities around the world,’ the spokesman says.

Tomato, Hi-Res and Universal Everything will continue to collaborate on generating content for all the stores’ multimedia displays, according to Tomato designer Jason Kedgley.

The combined work includes an Interactive Video Grid of LCD screens that play back customer videos and text messages created using phones within the store. They can also link to similar screens in other Nokia flagships around the world in real time.

The Chicago flagship is Nokia’s second and follows a trial store in Moscow, which opened earlier this year (DW 23 March). Other stores will open throughout 2006 and 2007.

‘By locating the Nokia flagship stores in the world’s premier shopping locations, and [with] the surroundings that we are delivering, we think we will exceed the expectations of even the most experienced shoppers,’ says Cliff Crosbie, director of global retail and trade marketing for Nokia.