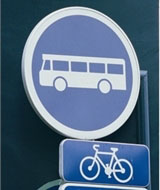 Man has always used landmarks to help him find his way around. While wayfinding systems have become increasingly sophisticated, often the most effective signage is also the most simple, says Jim Davies.

Unfortunately, we humans aren’t blessed with the innate sense of direction of some of our animal cousins. Migratory birds manage to flap thousands of miles to come back to roost in the same nest each year. Poignant stories of lost dogs who’ve trekked hundreds of miles for emotional reunions with their masters are not uncommon. A worker bee buzzes easily back to its hive at the behest of its queen.

So, from our earliest days, we’ve had to think our way around the delicate problem of getting from A to B without circuitous alphabetical diversion. And the most common way we do this is to look for signs – visual clues that tell us where we are and how we should proceed on our journey. Our hunched, hirsute ancestors may have scanned the horizon for a large boulder or a crooked tree. Later, a church or castle might have provided the necessary orientation. Even now, we use familiar landmarks – ‘just past Starbucks on your right’ – to determine our next movement.

But, over the centuries, we’ve also developed our own more sophisticated, custom-made means of ‘wayshowing’ – complex systems of displaying information, which can tell us anything from where to buy cereals in a supermarket, to which seat we should take at a football stadium, to where to turn off the motorway for Grimsby. 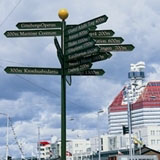 The creation of major wayfinding systems is the astrophysics of graphic design. It comes burdened with a huge weight of responsibility – get it wrong and you can not only inconvenience people by sending them to the wrong place, but you could also put their lives in danger. There are certain principles you can follow for sure – and these are well covered in Per Mollerup’s absorbing book Wayshowing – but no two situations are alike, so each project throws up its own particular set of issues and conundrums.

Much of a system’s success depends on articulating a graphic language that the man or woman in the street (literally) understands instantly, that translates often convoluted instructions into an eloquent nugget. Unsurprisingly, then, information design has become a highly specialist area, where only a few hardy souls dare to venture. And, before they start sticking their brave necks out, they need to get to grips with a small library’s worth of conventions, technical considerations and dos and don’ts. ‹ Did you know, for instance, that little white stick men running on a green background is the internationally recognised image for exit signs? That black on yellow type is easily the most visible, but is used sparingly because it connotes danger and cut-price goods? That it’s much easier to read letters downwards than upwards?

In signage, arrows and other pictograms have become an essential form of shorthand, but these, too, can cause confusion unless they’re carefully handled. In Roman times, a foot, a rectangle (money) and a woman’s head were widely understood to mean the way to the nearest brothel. Now we are bombarded with a glut of public information symbols, showing us where we can hail a taxi, exchange currency, take the stairs, dump our litter, grab a fire extinguisher or relieve ourselves. Many don’t translate, are ill-conceived or badly rendered – is that a man at work or someone struggling with an errant umbrella?

Having thoroughly set out the theory, Mollerup spends the second half of his book showcasing examples of good practice. Given the constraints and pressures we now know information designers have to work around – let alone juggling the demands of officious councillors, precious architects, self-interested management and a dozy public – you can appreciate what a mighty achievement they represent. 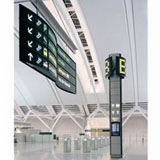 So hats off to Erik Spiekermann’s programme for BVG, the sprawling Berlin transport system, which elegantly rationalised wayfinding across 170 subway stations, 211 bus lines, 67 000 bus stops and a 180km tram network after reunification; David Hillman’s witty signage for the National Maritime Museum in Greenwich, which uses suspended sail-like devices to point the way and let you know you’ve arrived; and Paula Scher’s suitably dramatic solution for the Duke Theatre in New York, which uses de Stijl yellows, reds and blues, and outsized type dancing on floors and walls, to create distinctive zones.

The contributions from Japan are typically progressive, especially Tokyo’s Umeda maternity hospital by Kenya Hara. Here all the signs are made of washable, white, cotton cloth, reminiscent of nappies. Each sign can be washed up to 400 times and has two replacements. The signs create a soft, clean, welcoming atmosphere – and, of course, they’re eminently practical.

We’ve certainly come a long way since we looked out for that familiar boulder. But there’s still a valuable lesson to be learned from it. When it comes to signage, the simplest route is often the best one.

Wayshowing – A Guide to Environmental Signage Principles & Practices, by Per Mollerup, is published by Lars Müller, priced at £32

Virgin Mobile gears up for launch of own store chain