“When it comes to design and the queer community, there’s not a world in which I would ever want one to exist without the other,” so says graphic designer Rebecca Brooker.

Brooker is the co-founder of Queer Design Club, an online community for LGBTQ designers. Its mission, she says, is to provide queer creators with a space to share work and build relationships with each other.

Design Week speaks to Brooker as the month of Pride, celebrated each year in June, is drawing to a close. With the coronavirus pandemic prompting worldwide lockdowns and Black Lives Matter protests erupting across the globe, it has been a very different Pride month in 2020 to what many have grown used to. Throughout it all, she says, design has proved to be an important tool for both disseminating information and unifying a dispersed community.

In lieu of physical meetings and events, LGBTQ designers and community members have had to find other ways of connecting. The design, development and adoption of digital platforms have been a key part of this.

“We’ve rethought what it means to work collaboratively – usually this requires physical contact with people, but video messaging platforms have allowed us to overcome restrictions in geography,” Brooker says. “In this way, our designs can reach further and include more people than before.”

Beyond easing design collaboration and working streams, the online world has facilitated celebrations that would have otherwise been abandoned. And similarly, these events have benefitted from the lack of geographic restrictions.

“I’ve been amazed at how people have transferred previously real-life events to become digital events,” says Poonum Chauhan, creative director at Moon Creative and former head of design for Pride in London. “It’s opened up the attendance too, people who lived too far away or were unable to make it to the in-person event can still be a part of it via other means.”

“We want to see real changes”

“I think it allows for a lot more intersectionality and ownership – people are creating their own spaces,” she says. This is especially relevant, she adds, given that some larger organisations “are just not doing enough or supporting the community the way they should”.

Chauhan’s point here is an important one – with no physical Pride events, and organisations and brands necessarily throwing all their weight behind online communications, has this made it easier than ever to pay lip service to the LGBTQ community without putting any real effort in?

It’s a subject Brooker is wary of: “I think there’s something to be said for brands that have stayed silent for the whole year and then changed their logo to a rainbow on 1 June.”

Getting corporations to support and hire queer designers is part of the reason Queer Design Club exists in the first place. “We want to see real changes in the way things are approached,” she says. 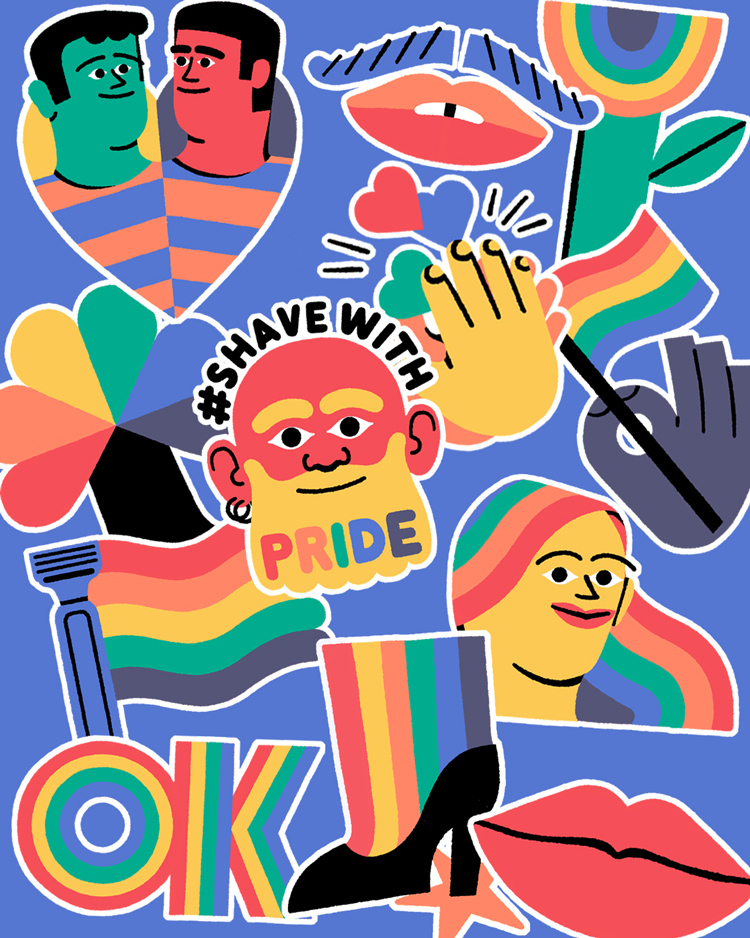 “Focus should always been place on visibility”

But while there can be a tension in brands entering LGBTQ spaces – especially during Pride, and perhaps even more so during this different form of Pride – Brooker says that brands that have followed up their words with measurable actions can have significant impact for those in the community.

One such brand trying to do that this year was Harry’s, which launched its Design with Pride campaign earlier in the month, alongside its Shave with Pride kits. Taking the form of a series of interviews with LGBTQ creatives, the initiative sat alongside portraits drawn by Spanish illustrator José Roda.

“Focus should always be placed on visibility, showcasing the talent and excellence that exists within the LGBTQ+ community across industries and mediums,” says Roda. With this in mind, 100 per cent of the proceeds of the campaign are going to The Trevor Project, an LGBTQ organisation focused on suicide prevention.

“The beginnings of queer culture as we know it now”

Digital practices have been significant features of this year’s Pride, as anyone might have expected, but as always so too has graphic design.

“The value of graphic design in particular this year has been in its ability to help us communicate,” Brooker says. “It has helped us disseminate information in a way that feels accessible to people.”

As she points out, graphic communication has always been an integral part of the queer community, and indeed much of the early work done by LGBTQ creatives in the 20th century feeds into the graphic language of the movement today.

Referring to the book Queer X Design, published last year by art historian Andy Campbell, Brooker gives the example of button-making in the early days of the gay rights movement. Such buttons, and similar DIY and craft-based design practices, were a means of both protest and self-identification.

“The idea of handcrafting and DIY were some of the first ways LGBTQ people creatively expressed themselves – buttons were really part of the beginnings of queer culture as we know it now,” she says, pointing to designers’ penchant for funny or irreverent slogans and simple graphics.

With Black Lives Matter protests happening throughout June, and many LGBTQ people being affected directly by racism or being allied in the fight against it, some commentators have suggested Pride in 2020 is more in touch with its roots than previous years.

Brooker echoes this, saying that this time around feels “more authentic”. As for design’s role in this, she says it has been and will continue to be a tool for all to use – as she points out, a lot of design work now and in LGBTQ history has been done by those who aren’t necessarily professional designers.

“If you look at some of our most iconic graphics, like the pink triangle, these weren’t refined for hours in Photoshop,” Brooker says. “They’re effective instead because of the visual and historical weight they hold.”

She ends: “Design is a tool for distributing information to people, and this Pride has been a good example of that.”