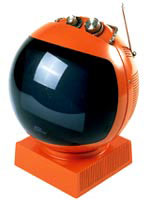 “Plastics are a very magical substance,” says writer and plastics enthusiast Sylvia Katz, curator of a new exhibition at the Geffrye Museum celebrating the role of plastics in the domestic environment.

Invented as long ago as the 1860s, plastics are organic polymers that can be cast, extruded or moulded. It is a process that Katz likens to alchemy in that substances, such as crude oil, can be transformed into exciting and colourful mass-produced materials, whose properties can be tailored simply by altering the manufacturing recipe to different specifications.

She does not share the rather negative opinion that plastics have often attracted over the years. Even today, many among the older generations consider them cheap and inferior.

“Plastics are perceived as not as worthy as the so-called “noble” materials of glass, wood, metal and ceramics, but they are now really the fifth “noble” material and we will be depending on them increasingly,” she says.

The Geffrye Museum’s exhibition At Home with Plastics? seeks to show their contribution to the home over the years in the traditional Geffrye format of roomsets from different eras – the 1930s, 1960s-70s, and present day. In the roomsets, far from being denigrated as inferior, plastics are the only real objects – the rest are simply cardboard cut-outs. Bakelite features prominently in the 1930s room in the form of door knobs, telephones and ashtrays.

World War II brought further strides in plastics production, resulting afterwards in the widespread manufacture of polythene, polystyrene and PVC and some are included in the 1960s-70s room, along with the Robert Welch Lumitron Lamp and a Robin Day 4-400 Easy reclining chair for Hille. For the contemporary roomset, Katz’s objects include Ron Arad’s Bookworm, a Hitch Mylius sofa with 100 per cent synthetic upholstery and some mobile polypropylene units. Many modern plastics, she adds, are “hidden” in the home such as insulation and cabling.

These roomsets are supplemented by eight cabinets of Katz’s personal choice of plastic objects that place the three eras in a historical context. She includes a set of dinner knives made from Parkesine – the first modern plastic invented in Birmingham in the 1860s – plus the first plastic-bodied kettle and the first dishwasher-proof cutlery handles.

Katz feels plastics have now come into their own. “I think they are really upgrading from the early days when plastics were throught of as cheap and tacky until now when people accept them for what they are. Designers are using them in new ways and using them for quality products like Alessi and Authentics,” she says.

Instead of cheap and nasty, they truly are plastic fantastic.