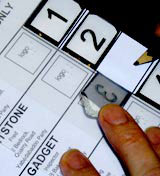 Blind and partially-sighted people will be able to vote independently for the first time, when thanks to a detachable, plastic, ballot paper overlay template designed by Goodwin Product Design and unveiled last week.

The Selector enables voters to “feel” a candidate’s number, featured as either a raised area or in braille, once the names and corresponding number have been read out by the returning officer. Voters lift a plastic flap and mark a cross in the correct box, in private.

Blind and partially-sighted people took part in a trial which resulted in 100 per cent success rate, Goodwin director David Goodwin claims. The reusable template is available with a strong black line so people with tunnel vision, or those who only see in bright conditions, can vote, he adds.

The Selector is being distributed to every polling station in the UK prior to the forthcoming local and General Elections, says Goodwin designer Nick Hamnett.

The Royal National Institute for the Blind, which has been campaigning for equal rights for people with sight problems, welcomes the design. Director of policy Fazilet Hadi says. “The ballot template, plus provision for large print at polling stations, are vital steps towards ensuring the fundamental right to a secret ballot is guaranteed for anyone with a sight problem.”

Goodwin won the project following its work with the client, Packflatt, on a collapsing, concertina-style ballot box.

In the past, blind and partially sighted people could vote, but they had to use an assistant to do the actual voting.

All credit to Springetts for Barclaycard identity